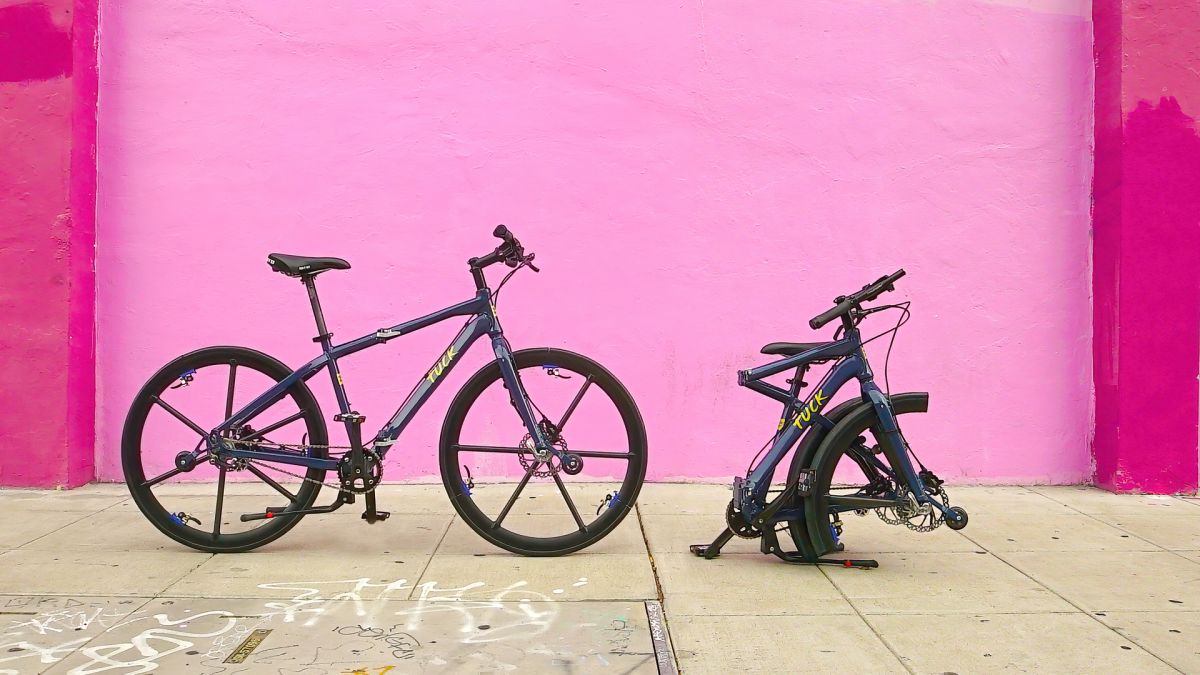 Although the picture above may look like a bicycle that has been severely vandalised, it is actually a revolutionary new folding bike. Tuck Bike, which is funding on Kickstarter now, doesn’t just have a frame that folds, it actually has wheels that fold too. The big, big benefit of this is that the bike can have full-size, 28-inch wheels and, as a result, looks like a normal bike. Even Bromptons, as good as they are, can’t really claim to look ‘normal’, and some current folders look even more eccentric.

For a lot of people, the ability to fold is an essential part of the makeup of the best bikes for them – and, come to that, the best electric bikes. Given the option of folding and not having people point at them and laugh as they cycle to work, a lot of commuters are likely to be attracted to the Tuck Bike, I fancy.

Scroll through to see how the Tuck Bike folds

Scroll through to see how the Tuck Bike folds

The very amusing promotional video for the Tuck bike – see below – features some arch shade throwing, with an absolutely tiny bike being ridden by a clown used as an example of a standard folding bike. That’s a bit naughty but here’s a true story story: I once test-rode a folding bike. At one point, I rolled off a kerb into the road, having picked up some shopping. The front wheel of the bike landed on the grate of a drain cover… and was small enough to fall straight through it! The result: considerable discomfort for me and a completely wrecked front wheel.

Okay, so that was an unlucky, 1,000/1-shot incident that may never have happened to anyone else in the history of cycling. But even so, it’s made me very wary of folding bikes with small wheels.

The Tuck Bike, as the eagle-eyed will have spotted, has front and rear wheels that have three little clips on. Once these are undone – no tools required – the three section of the wheel somehow telescope inside each other, giving the ‘wheel that’s been attacked with an angle grinder’ look that you can see in the pics. Again, this is in the video, and really has to be seen to be believed.

To make this work requires sturdy rim and hub locks, in wheels that are formed from carbon fibre tubes. The tyres are airless, obviously, filled with foam. Once fully folded, the Tuck is just 26x16x34 inches (65x40x86cm) – that’s as good as a lot of small-wheeled folders.

How do you push the bike along when the wheels have been folded away? Simple: there are little casters – very Brompton-esque – that take over rolling duties.

That’s not the end of the cleverness, though. It’s not necessary to do a ‘full Monty’ fold every time. You have the option of just folding the handlebars down and the pedals up, to lean your Tuck Bike in a corridor.

Then there’s the ‘quickie’ fold that makes it possible to take on public transport, in a matter of seconds.

Of course, the idea of folding wheels is a little alarming. In fact I admit that my first thought was, ‘disaster waiting to happen’. However Tuck assures us that, ‘In the past year, the wheel passed the ISO fatigue safety test (4210-7:2014), pounding into 750,000 bumps at 15mph while overloaded.’

The rubber foam tires, developed by Gecko Rubber Ltd of the UK, are said to ‘last for 4,000+ miles’. They’re also completely puncture proof, of course. There are no gears, but you do get a very substantial kick stand, which makes it easier to fold the Tuck Bike.

You also get a hydroformed aluminium frame, disc brakes and a ‘high-end WTB Comfort saddle’. The frame is available in two sizes, with small/medium for people  5’2” to 5”8 tall, and a large one for those 5”8 to 6’2”+.

The Tuck Bike is the brain child of Alex Animashaun – pictured here – a Londoner now resident in Oakland, California. Alex is a former Jaguar Land Rover engineer who worked on the hybrid Range Rover and the Jaguar C-X75 supercar featured in the James Bond film Spectre. His CV also includes, ‘speeding up production in one of Britain’s largest cake factories’ and leading the design team at a Kenyan car startup. Okay.

“I couldn’t see myself riding on a small wheeled folder and this is a great bike to ride whether you fold it or not,” says Alex.

So, I haven’t tried this bike out yet, and I had a great deal of scepticism about it when I first saw the photos. However, this video and the details of its testing have got me quite excited. After all, it’s not every day that a product comes along that quite literally reinvents the wheel. Have a look for yourself and see what you think!

Tuck Bike is $1,795 on Kickstarter. When it comes to ‘proper’ retail it’ll be $1,995. There were some available at an early bird price of $1,695 but some lucky Tuckers have already snapped all those up. Sorry.

The retail price equates to £1,500 or AU$2,700. However the Tuck Bike will initially be available for delivery in the US and Canada only. Boo.