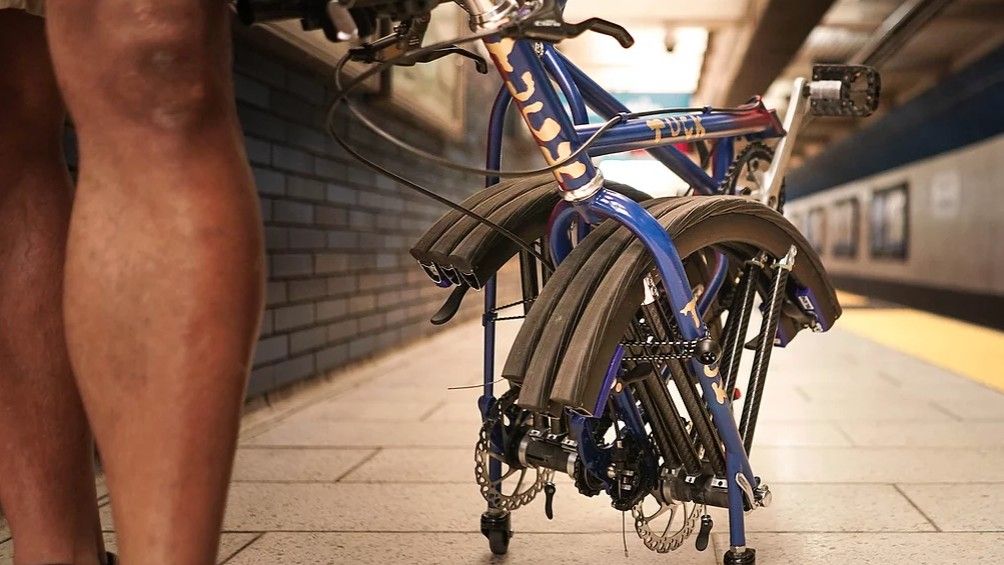 The Tuck Bike is a full-size folding bike with a feature that its inventor claims is a world first: folding wheels.

It is designed by British-born, Oakland, California-based engineer Alex Animashaun, who has previously worked for Jaguar Land Rover and a vehicle startup in Kenya.

“After a trip home to London, I returned to Nairobi, Kenya thinking about all the folding bikes I saw,” says Animashaun. “Why did they have to have tiddly, dinky little wheels? I realised that they have small wheels so that they can be folded up to a small package. The wheel is the last indivisible item on a bike, and therefore is the limit. So then I wondered, what if you could fold the wheel?”

Animashaun’s patent-pending 700C wheels use six carbon-fibre tubes instead of spokes, and break down into three segments. Each segment, braced by two ‘spokes’, slides sideways on the hub and stacks once a QR on the rim unlocks each of the three break points.

“Imagine a pizza cut in three slices. You stack the pieces up and that’s how it folds,” is Tuck Bike’s explanation.

“We reinforced the rim at the ends and hold them together with wedge clamps, so the joints are actually the strongest part of the wheel. Each third of a wheel is independently strong and true and when assembled together, they’re even stronger. There’s a final clamp at the hub, and you need at least three clamps to open before any segment can fold.”

Tuck Bike says the wheels have been designed and tested to meet the highest safety standards in the industry and are ISO 4210-7 certified.

The handlebar and aluminium frame then fold more traditionally, with casters at the rear dropouts making the Tuck Bike, which weighs a claimed 14kg, easy to roll.

The folding process takes under two minutes – in the YouTube video above, Animashaun completes it in 1:37 – and the bike folds down to 61 x 83 x 37cm, which Tuck Bike says is as small as a typical small-wheeled folder.

Of course it doesn’t have to be fully folded each time – just the handlebars can be folded for storage in a narrow hallway, or it can be folded in half at the frame.

As for the spec, the Tuck Bike uses Tektro Aries mechanical disc brakes with 160mm rotors operated by Avid BB5 levers. It runs a 42×18 singlespeed gear. The saddle is a WTB Comfort ProGel and it comes with Wellgo folding pedals.

There are two sizes – medium and large.

Don’t forget to check out Cycling Weekly’s guide to the best folding bikes.