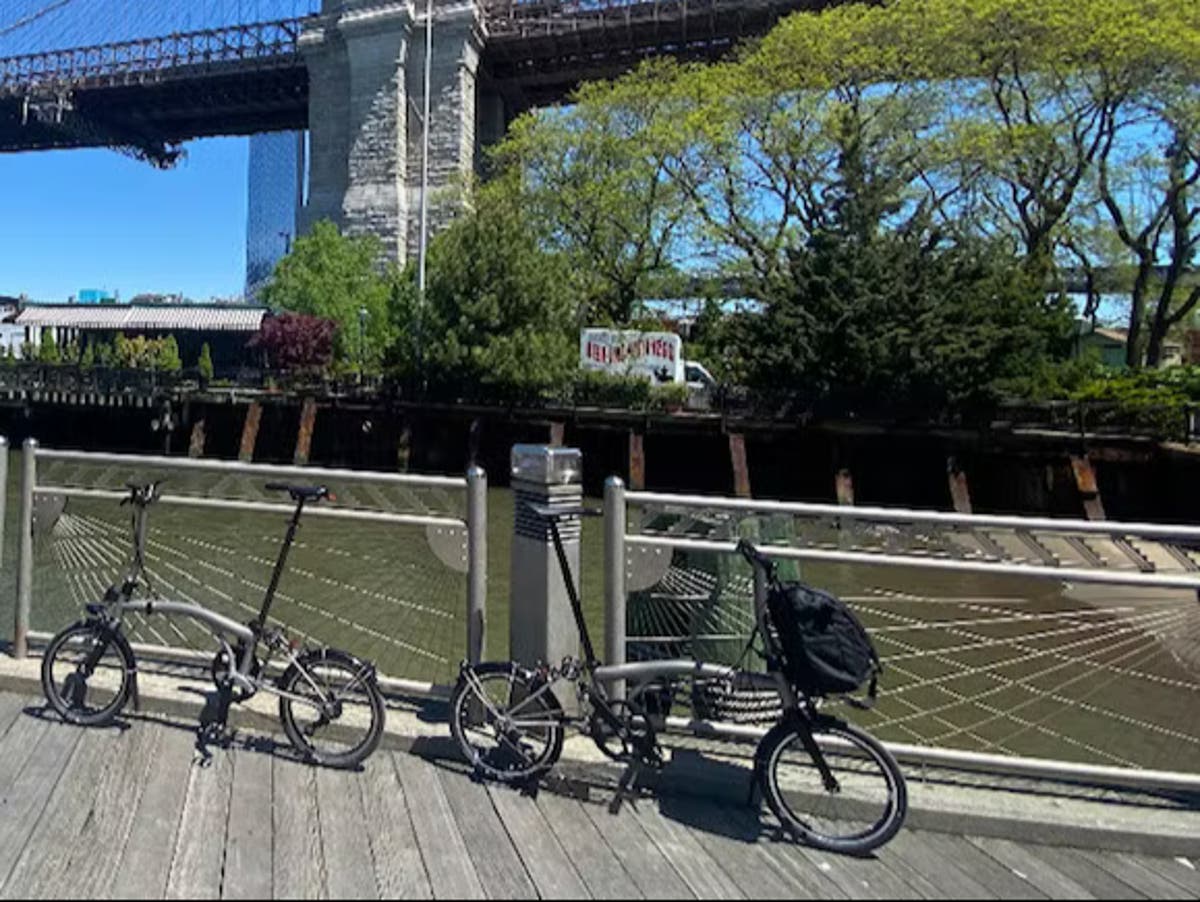 How do you make a bicycle disappear?

It’s a magic trick I witnessed recently on the East River Ferry, performed by Will Butler-Adams, head of the folding bike company, Brompton. A few origami-like folds and 30 seconds later, his bike was reduced to a third of its size and tucked behind a bench on the top deck. As we took in views of the Brooklyn Bridge and Manhattan skyline, a security guard corralled other cyclists onboard – and their un-foldy bikes – onto the covered lower deck.

“It’s like the Swiss Army penknife,” Butler-Adams says. “It’s hidden and then when you want it, it suddenly appears.”

Climate change has lit up conversations around how to transform the gas-guzzling car culture of most American cities. And while billions are poured into electric vehicle production, and the necessary nationwide charging network, it will only take us so far – particularly in densely populated cities.

Enter “micro-mobility”: a wonkish term of social scientists and urban planners which encapsulates everything from bicycles, tricycles, and scooters, to skateboards and wheelchairs.

Ready-to-roll solutions for daily “A-to-B” trips in towns and cities can play a critical role in cutting greenhouse gas emissions which are broiling the planet. Transport makes up the largest share of the US domestic carbon footprint (29 per cent), with cars, pick-ups and SUVs accounting for half of that.

Cycling as a mode of transport has been slow to catch on in the US compared to other countries. In part it’s down to the infrastructure built in the mid-20th century – when American car-makers were king – which encased cities in vast concrete highways. But neither can the lack of will among many public officials be overlooked.

Aside from the considerable climate argument for carbon-free transport, the Covid pandemic opened the eyes of urban dwellers to the idea that life is healthier – and far more pleasant – when air-polluting queues of traffic are taken away.

Some US cities are making strides, and New York is among them. Half a million bike trips are made daily in the Big Apple, tripling the amount 15 years ago, NYC’s Department of Transport says. The city now has more than 500 miles of protected bike lanes and cycling to work has grown at five times the rate as other cities.

The Brooklyn Bridge bike lane, which opened in September 2021, has doubled cycling rates over the bridge (but hasn’t been without criticism from cyclists for its narrowness).

“When I came [to New York] 20 years ago, there wasn’t a cycle lane in town,” Butler-Adams says. “If I’d said there were going to be cycle lanes, cab drivers would have kicked me out of town.

“Now if you tried to take them out, there would be uproar.”

For Butler-Adams, a habitual cyclist in his native London, bike-riding in cities creates a sense of community.

“People are not intimidated by a bike, you’re more vulnerable, more approachable,” he said. “I chat to people at traffic lights. In a car, it’s more like, ‘how dare you get in my way!’”

He notes that while the next big tech boom may be “flying cars”, “it’s not going to solve the world’s problems”.

“We’ve got a climate crisis. We need to be minimising our use of resources, consuming less. Simplifying life brings contentment, a sense of calm and a bit of slow down.”

However Butler-Adams concedes that the biking sector has work to do on its own green credentials, partly due to the long-held belief that sustainability is inherent to bikes.

“In some respects, it’s a fair argument,” he says. “It’s a fantastically efficient product but that doesn’t mean we don’t have a role to play.”

Brompton hired a head of sustainability, Louisa Holbrook, in 2020 to keep their efforts on track, says Butler-Adams, which have included switching facilities to green power, and encouraging staff and suppliers to do the same, and reducing packaging waste.

As has been common across business, the Covid-19 pandemic and supply chain issues set them back on sustainability targets.

“We look back, and we haven’t made nearly the progress we hoped,” he says. “But the will is there and we want to be sustainable. And the cool thing about using less is it drives efficiency. If you’re less wasteful, you’re more profitable. Necessity is the mother of invention.”

Last year Brompton joined the “Business Ambition for 1.5C”- which states that to avoid the most significant effects of climate breakdown, we must halve emissions before 2030 and reach net-zero before 2050. Brompton is developing its own science-based carbon reduction targets to be published this year.

When you get on a bike, it reminds you of when you were a child, it gives this sense of freedom. It’s good for your soul.

However Butler-Adams said they joined the initiative in order to highlight “in a positive way” that it’s not possible for the bike industry to dramatically cut emissions. Right now, plans to manufacture carbon-neutral steel and titanium are still in their infancy.

“We make a steel bike,” he says. “We are committed to net-zero but at the moment, there is no solution. We need to be honest with ourselves and we need to be more ambitious.”

He added: “What are governments doing? Because transferring these heavy industries into viable net-zero supply chains is at a macro-European or macro-US level of investment.

While Butler-Adams is enthusiastic about cycling, he doesn’t belong to the tribe of Lycra-wrapped, 50-mile weekend road warriors. “I’m not obsessed by cycling. I’m not spending all weekend cycling. This [bike] is just a tool,” he says. “I’m not a ‘walkist’ but I walk everywhere and I’m not an ‘iPhone-ist’ but I use my iPhone everywhere.”

The popularity of folding bikes has built slowly since designs began to emerge in the 19th century. In 1975, Andrew Ritchie, a British engineer, invented the Brompton (named for the Brompton Oratory which his London flat overlooked). He engineered a bike that could be quickly folded into a small, locked package a little larger than its wheels.

He was repeatedly rejected by major bike makers until in 1987, he received investment from Julian Vereker, an English designer of audio equipment, and an avid Brompton fan. Ritchie went on to win the Best Product Award at a London cycling show and by the early ’90s, Brompton’s London factory was hand-building 60 steel-framed bikes a month.

Butler-Adams, a Charted Engineer, landed at Brompton in the early 2000s quite by chance, when he was in his late twenties.

“I sat next to a random bloke on a London bus and got chatting to him. It was the one of the best friends of Andrew Ritchie,” he said. “I’d never seen a Brompton and didn’t have much time to get my head around the bike. But I did see that Andrew couldn’t make enough.”

He said the appeal was immediate. “I’m not naturally an urbanite, I was brought up in the countryside,” he said. “But living in London with this bike was such a laugh.

“I wasn’t stuck in traffic or down in a little metal tube underground, I was whizzing across London. I’d been in London a year and I knew it better than most of my friends who’d been there 10 years because I was going down back streets, canals over the park.

“I’d meet Sarah, my now wife, and we’d meet friends in the pub, then go to a nightclub, and I’d still be on my bike. She’d stand on the back and we’d pedal back to my place or her place.

Butler-Adams described Ritchie as a genius. “For 13 years, everyone knocked him back but he wouldn’t give up. We have thousands of his pencil drawings, not just for the bike but how to make all the jigs and fixtures.”

However the inventor’s strength did not lie in executing operations. “The facility was chaos, stock everywhere,” Butler-Adams recalls of the original factory. “It was everything you weren’t taught at university.”

Ritchie acknowledged as much in a previous interview with the Sunday Times, admitting he was not “a model businessman”.

“My strength is my eye for detail and an obsession with getting things right but I’m weak in other areas. I would have been happy with the 10%-a-year growth we were seeing but Will recognised that there was a much bigger market not being satisfied,” he said.

The original Brompton rider was typically male and older. In 2005, Butler-Adams was a lead engineer on a new Superlight model, built with titanium, which reduced the Brompton’s weight from about 27lbs (12.5kg), making it an option for more riders.

Ritchie, now in his 70s, handed over running the company to Butler-Adams around the same time but remained on the board until recently. He received the Queen’s Award for Export, and the Prince Philip Designer’s Prize while Butler-Adams was given an OBE for Services to Industry in 2015.

The rise of social media saw Brompton’s popularity really take off, Butler-Adams says. Suddenly people who may have extolled its virtues to colleagues or friends at the pub were doing so on Instagram, Facebook and Pinterest.

Brompton now makes more than 70,000 bikes a year, and the original few dozen staff has grown to 800 people. Bromptons are sold in locations from Adelaide to Aberdeen, with some 850,000 bikes on the road.

The quirky bike now has a big American Dream – with a store in downtown Manhattan, and plans for a West Coast expansion later this year, before growing to other US cities. The company also plans to roll out a bike hire program (which can tried for free from their West Village store to celebrate National Bike Month).

Although expensive (its range of models, including an electric version, start at upwards of $1,000), the appeal of a bike that condenses to the size of a large pizza pie is obvious when it comes to the cramped apartments of many New Yorkers. Two-thirds of the global population is expected to live in cities by mid-century so space will be increasingly at a premium.

The ability to tuck a bike under your desk at work, or a restaurant table, or an apartment closet, seems preferable to taking your chances on city streets. (My current bike lock weighs more than a toddler and would take a firefighter’s angle grinder to remove if the key goes missing. One friend dislocates his front wheel and brings it to bars to thwart opportunistic thieves.)

Yet the appeal of cycling for many city slickers goes far beyond convenience, Butler-Adams says.

“It lets you celebrate the city, the architecture, the landscape that we live in, rather than spending billions on some new tunnel and shoving everybody underground,” he says. “When you get on a bike, it reminds you of when you were a child, it gives you this sense of freedom. It’s good for your soul.

He added: “The bicycle isn’t going to solve the world’s problems but cycling in cities has a massive role to play, and the sooner we get there, the better.”