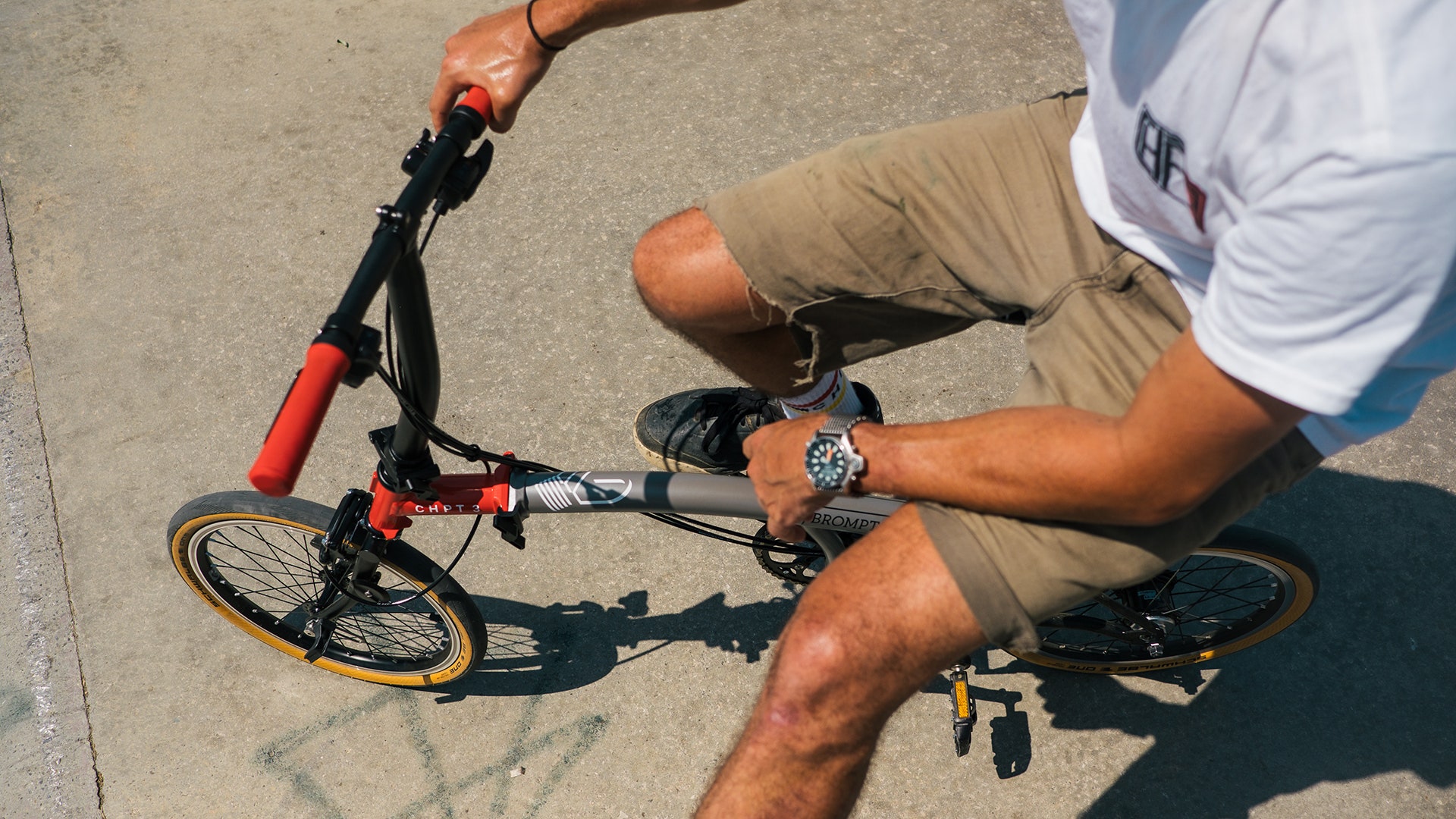 Forgotten what a Brompton is? Allow me to jog your memory. Go back six months, maybe seven. You’re running for the train after a long day at work. You get on. Of course, it’s packed. And the one small bit of standing room left in the corner? Occupied by a folding bike that will condemn you to a train ride home of misery. That moment was one of the most dreaded parts of my commute, and those who rode them were my nemeses.

After a week spent with one of these contraptions myself, the tide has well and truly turned. I have become the person I used to, well… not exactly hate, but certainly send withering glances to from the other side of the carriage. The culprit behind this dramatic change in my opinion? The new Brompton x CHPT3 Special Edition.

You might be wondering why I am recommending a bike that has become synonymous with commuters, when for so many of us, it seems a return to the office is off the cards for at least the next six months. Definitely a fair question. Although it’s made for the city, that sense of practicality is just as valuable when a commute isn’t involved. It rides well on most roads, you don’t have to worry about storing it awkwardly in your house, you can put it easily in your car, and at the end of the day, it is just a really great bike.

When thinking about purchasing a two-wheeler, normally you’ll be taking into consideration factors like speed, stability, handling, size and, of course, style; all of which the Brompton x CHPT3 scores highly on. Co-created by former Tour de France stage winner David Millar, this bike drew on his cycling experience to help Brompton develop something that maintained all of the brand’s practical elements, but made no compromises on speed and riding experience.

Given the smaller-than-usual size of the wheels, I expected the CHPT3 to ride far slower and with much more difficulty than the pretty basic bike I currently own, but was pleasantly surprised to find the opposite. It accelerated smoothly and moved much faster for less effort. The most surprising element was just how light it was. At just 10.8kg it is in the lighter end of the range of Brompton bikes that are currently available, which makes it beyond a breeze to fold and carry around with you. However, it has to be said – the wheel size isn’t for everyone; it can feel a bit awkward, balance is slightly trickier, and riding on unfinished roads is definitely a challenge.

Ultimately, what really makes this bike stand out from the rest is the carefully considered design. The lack of mudguards give it a really minimal feel that nicely complements the graphic on the side, which was apparently designed to represent the ancient alleys of Girona, where CHPT3 originates from. Not only does it look kind of cool, but that’s also a fun story to tell someone. If anyone ever asks.

So how was this enough to change my view on Bromptons completely? Honestly, it comes down to just simply how enjoyable it is to ride. It’s an experience in itself and, to a degree, it’s not hard to see why folding-bike enthusiasts have developed the cult-like reputation they have going for them. Maybe they nod at each other each morning with satisfaction at the great job they’re doing collectively making everyone else’s life more troublesome, or maybe it is just to acknowledge the fact they know they’ve had a far more enjoyable morning than the rest of us, just simply from that short ride to the station.

Of course, paying £2,295 for a bike is a big ask, but when you think about it, if you add up all of the money you’ll probably save over the years on public transport and Uber fares, the Brompton x CHPT3 is a reasonable investment. And let’s not forget you can carry it pretty much everywhere, rather than locking it up and leaving it at the mercy of anyone and everyone who owns a pair of bolt cutters.

Look, I get it: a Brompton bike isn’t going to be for everyone. But if you value practicality, love (or don’t mind) the small-wheel vibe, and ride mainly in cities where you want to get around quickly while avoiding public transport, then the Brompton is your bike. And if you’re going to get a Brompton, none are more stylish than the CHPT3.

Best cycling shoes to put pedal to metal in style