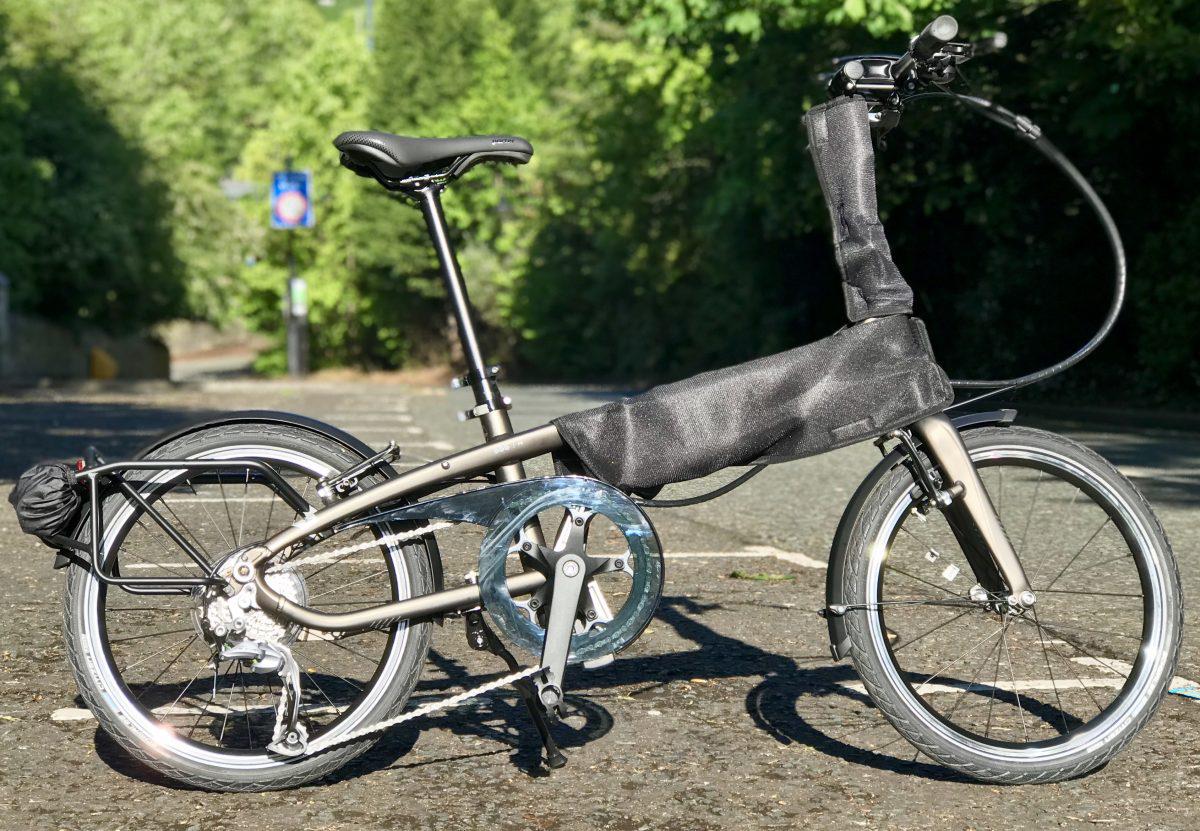 Tern–maker of the GSD compact electric cargo bike–has launched its latest bicycle on May 29 and it did so in a way more like an automotive company than a bicycle one. Journalists, including myself, were sent preview models on the strict understanding we would not reveal their secrets in public–when riding on the new BYB we had to cover the machine’s patented parts with bespoke shrouding so that no “spy shots” leaked out.

And, highly unusual for the bicycle industry, the BYB will be available to buy just a few weeks after launch. Normally, new bicycle models are launched some months before availability.

This secrecy and the fact stock of BYB’s are already on the water from the Far East is Tern’s promotion of what it calls a “milestone” machine. It is a folding bike, but not an electric one. Tern has been working on the BYB for four years and it features ten patented technologies, including new ways of folding.

The Taiwanese company was founded in 2011 by Florence Shen and Joshua Hon, wife and son of David Hon, founder of the long-established Dahon brand of folding bike. Tern has always made folding bikes, but the BYB–short for “bring your bike”–features what the company calls “TriFold” technology.

“New folding bike paradigms only come along every few decades or so, and we think the BYB falls into that milestone category,” pledges a company statement.

“If you look at folding bikes in the market today, almost all make use of a Dahon-style middle hinge or Brompton-style rear wheel fold under, and Bickerton-style monotube frames and extended seatposts,” said Joshua Hon.

“To date, all of our folding bikes have been of the monotube fold-in-the-middle variety. The BYB is different–and is a big step forward in folding bike evolution. The BYB represents a new folding paradigm.”

Hon added: “The geometry of the BYB hinges is so complex that we needed a mathematical formula to describe it in the patent. But notably the BYB also has some DNA from the GSD–the main frame tubes are the same as those we use in the GSD frame as are the front luggage sockets on the head tube.”

And the July availability of the bike is a key part of the BYB’s launch plan, as was a number of humorous teaser adverts released on social media.

“The secrecy was necessary because we’re launching the bike just weeks before bikes arrive in stores,” said Hon.

“We wanted to try this type of a launch because traditionally in the bike industry, there’s such a long lag between launch and consumers being able to get bikes. We’re as guilty of this as everybody else. We’ve always liked the Apple style of launching the product just days or weeks before retail availability.”

It would have been tough to keep details of the BYB under wraps. Hon agreed: “We’ve also been really stern with our distributors, warning them that any careless leaks will blow the launch, which ultimately affects them. We have a global distributor meet up once a year and by now, all of our distributors are pretty good friends and enjoy the few days of hanging out together. You wouldn’t want to show up at the distributor meeting having been the person to blow the launch for everybody else.”

Tern describes the BYB as an ultra-compact bicycle. The company claims it is 30% smaller than typical 20-inch folding bikes (bicycle sizes are stated in wheel diameters) and is Tern’s smallest yet: the bike has a folded footprint of 13.8 inches wide and 31.9 inches tall. This is compact but not Brompton compact. The folding technique is clever, and rigid, but not as rapid as a Brompton fold.

“The BYB is the culmination of four years of focused work by the team,” said Hon.

“We had to develop some radically new technology for this bike and the manufacturing tolerances are, in the words of our factory partner, ‘tighter than automotive.’”

The BYB has rack-integrated spinner wheels, and stands upright within easy reach.

“Wheeling the folded BYB on crowded subway platforms or rolling it into an elevator–all while holding a cup of coffee in the other hand–works just like trolleying a suitcase,” said Hon.

The bike also fits into its own hard-shell suitcase, the AirPorter Slim, and there are other BYB-specific accessories, too, including the “PopCover,” a disc-shaped case that opens like a pop-up tent, creating coverage for the folded bike, useful for shielding a dirty BYB from fellow train passengers, for instance.

Many competitor brands sport 16-inch wheels, which makes for a tight fold, but not always a comfortable ride.

“We spent a lot of time debating wheel size at the start of the project,” stated Hon.

“Some argued for using a smaller wheel which, of course, results in a smaller folded package. But smaller wheels come with a compromise in ride quality. In the end, ride quality won out because putting in miles day in and day out, [a bike] has to ride well.”

“Some people might find it a bit surprising that we are launching a non-electric bike since the trend is going to electric,” Hon ventured.

“An e-bike lets you do the entire trip by bike and skip cars and public transport. But for many people, public transport is still the fastest and most cost-efficient option, and all they need is a last mile mobility device to get them to and from the station.”

BYB’s TriFold technology features two hinges in the frame and one in the handlepost. The hinges rotates around stainless steel pivots sitting inside smooth Igus bearings. Levers lock shut automatically with aluminum pins.

The folded bike is locked together with a patented Anchor Bolt mechanism so the bike always stays securely locked no matter how it is lifted.