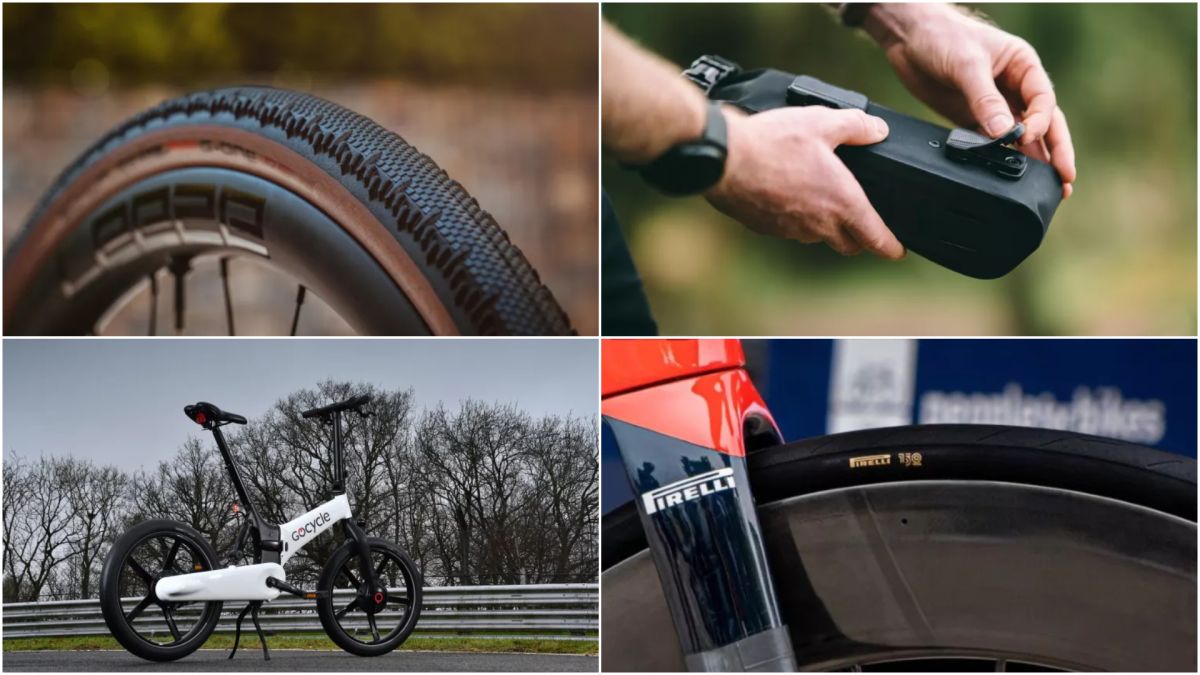 This week we have two tyres to discuss. First up there’s Schwalbe’s latest gravel offering the G-One RS. It’s built with speed in mind and is being raced at this month’s Unbound. Then there’s Pirelli’s P Race Zero 150° tyres, which celebrate the venerable Italian brand’s cycling heritage. The new rubber is released a 150 years after Pirelli’s founding in 1872 and some 127 years after its ‘Tipo Milano’ tyre was raced at the 1895 edition of Milano-Cremona-Brescia-Milano.

There’s also Tailfin’s latest bikepacking product, the V-Mount pack, which are created to provide storage solution for those of you who don’t have a bike frame with additional mounts points.

We also have not one, but two, folding bike stories both with environmental overtones: Hummingbird’s Flax model is the first folding bike made using flax fibre, while Gocycle have launched an initiative to make it’s G4 folding e-bike more accessible.

Schwalbe has added to its line-up of gravel tyres with the addition of the G-One RS. Described as delivering “road speed with cyclo cross grip”, the tyre will debut at the Unbound gravel race this weekend.

In fact Unbound provided the inspiration for the creation of the tyre. Despite Amity Rockwell winning Unbound in 2019 and placing second in 2021 riding G-One tyres, Schwalbe says it felt that a faster tyre was required.

To achieve this the G-One RS is a semi-slick with a center grip pattern inspired by its cyclo cross tyre, the X-One Speed. It’s designed to provide both traction and steering grip depending on the direction the tyre is rotating in. There’s also different rolling directions for the front and the rear tyre, with the intention of adding speed without sacrificing grip. In fact, Schwalbe claim that the RS has 20% less rolling resistance compared to the G-One R tyre.

To celebrate its 150th anniversary Pirelli has, unsurprisingly, released a bicycle tyre to mark the occasion: the P Zero Race 150°.

It’s what the Milan-based rubber maestros describe as an ‘all-round clincher’, which it says is suited to both racing and long training sessions. WorldTour team Trek-Segafredo debuted the P Zero Race 150° at the recent Giro d’Italia. Whether it was the celebratory tyre that bought them luck we’ll never know, but with Juan Pedro López wearing the maglia rosa for 10 days and finishing their race as the best young rider and home favourite Giulio Ciccone securing a memorable stage win it certainly received plenty of exposure.

Made in Italy in Pirelli’s newly renovated factory, the P Zero Race 150° uses the brand’s smartEVO compound, which it says delivers low rolling resistance and grip in both wet and dry conditions. The 120 TPI casing features techBELT technology designed to increase puncture resistance. It’s finished off with a subtle yet stylish gold livery, utlising the old P Lungo typeface.

For more on the P Zero Race 150° visit pirelli.com

If your list of riding essentials keeps growing to the point where your saddle bag can no longer cope but you don’t have a bike with dedicated mounting points, then Tailfin just might have the solution.

The British bikepacking equipment brand says it has created the V-Mount pack to improve on existing strap-on soft bags. The V-Mount system is built around the aluminum hardware that Tailfin says will “guarantee a 100% non-slip and non-marking attachment when mounted correctly.” To achieve this, and to stop the slip and slide issue you can have with strap-on bags when they’re fully loaded, the aluminium base plate features an angled channel that allows the mount to “cradle” the frame tube profile to achieve what it describes as “double line contact”. To further improve stability the V-Mount also uses a removable rubber boot for additional grip.

Each V-Mount pack comes with two V-Mounts, which are individually adjustable and allows the pack, Tailfin says, to work with a full range of tube shapes and external cable routing.

As for the bag itself, it comes in two sizes, a 3L and 1.7L, with the latter designed to work with road and gravel bike frame geometry and q-factor. It’s fully waterproof and features a roll-top opening that usually makes for easy access. Tailfin also notes that the bag’s contents can be accessed even when the bag remains mounted.

For more information of the Tailfin V-Mount Pack visit tailfin.cc

Hummingbird unveils a folding bike frame made from flax fibre

Hummingbird has made a name for itself as the maker of the world’s lightest folding bike. The headline this time around however comes courtesy of its chosen frame material, flax fibre.

The Hummingbird Flax is the world’s first folding frame made completely from flax fibre. Unlike the carbon used in the original Hummingbird, flax is a sustainable material, with the waste generated through production being biodegradable.

Importantly Hummingbird says that flax is capable of being just as light and strong as carbon. They appear to have made good on these claims, with the Flax folding bike passing ISO standards as well as matching its predecessor on the scales, weighing in at 6.9kg in its lightest iteration.

The Hummingbird Flax is available in single speed, multi-speed and electric models with pricing starting at £3,995.

While electric folding bikes are an important component of any sustainable urban transport solution, their cost can be prohibitive.

With this in mind e-bike brand Gocycle has launched its Gocycle Showroom Partner (GSP) programme that will enable it to offer its award-winning G4 model at a more accessible price point and one compatible with many cycle to work schemes. Gocycle have also rolled out interest-free financing options to help make its entry-level bike more affordable. GSP retailers will be offering test rides as well as a free 100-mile service.

G4 is available to buy direct from Gocycle and in GSP retail stores with individuals being able to nominate their local Gocycle Showroom Partner who will be on hand to offer test rides, pre/post-sales support and a free 100-mile service.

“Things are tough out there with cost-of-living increases and stock availability,” says GoCycle Founder Richard Thorpe. “ We’ve taken a look at all of the areas in our promotion, warehousing, delivery and sales process, and where possible, we’ve implemented cost savings to make our entry level model more competitive and accessible to a wider customer and retailer base.”

For more information on the GSP programme and Gocycle e-bikes visit www.gocycle.com (opens in new tab)