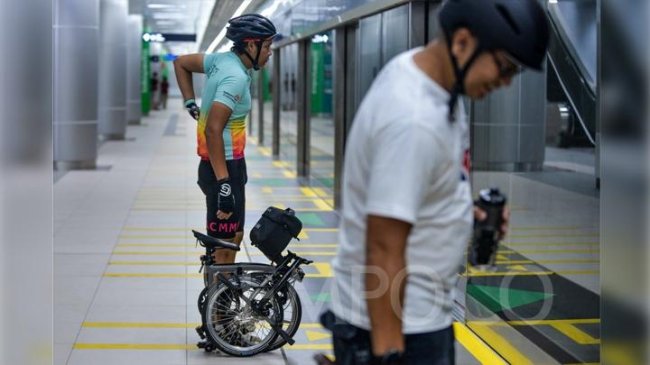 TEMPO.CO, Jakarta – The management of Mass Rapid Transit or MRT Jakarta is preparing a policy that will allow non-folding bicycles to be taken on the train. The policy is planned to take effect beginning March 24, 2021.

The MRT had thus far only allowed folding bikes to be on board the trains. MRT President Director William Sabandar said his side will also prepare facilities for the bike users.

“The soft launching is planned to be held on March 24, at three stations,” William said in an online press conference on the MRT achievements.

The stations are Lebak Bulus Grab Station, Blok M BCA Station, and Bundaran HI Station. The non-folding bikes should have a dimension of 200 by 55 by 120 centimeters with a maximum tire width of 15 centimeters.

The accessibility hours will also be limited in order to prevent congestion, outside of rush hours at 07:00-09:00 and 17:00-19:00 on Monday-Friday and on Saturday and Sunday in line with the train operational hours.

“We will later set a special car [for passengers carrying non-folding bikes]. We are still designing the concept. Through this initiative, Jakarta will be more friendly not only to pedestrians but also to cyclists,” said the MRT Jakarta President Director.