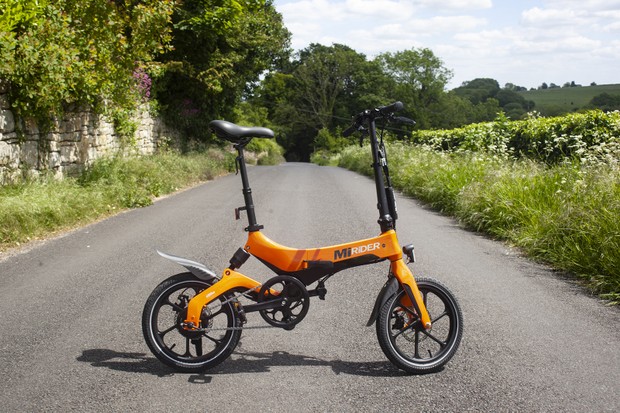 The MiRider One is a keenly-priced, compact folding electric bike that will brighten up almost any cycle commute.

Some riders may find the single gear limiting, but the One’s ‘boost’ trigger provides a handy dose of added assistance when required.

The One offers 250 watts of assistance, up to the legal limit (in the UK) of 15.5mph / 25.5kph, via a rear hub motor. The removable and lockable battery is housed in the front half of the main frame, while at the rear there’s a comfort-enhancing suspension system.

The MiRider One is reasonably compact when folded. 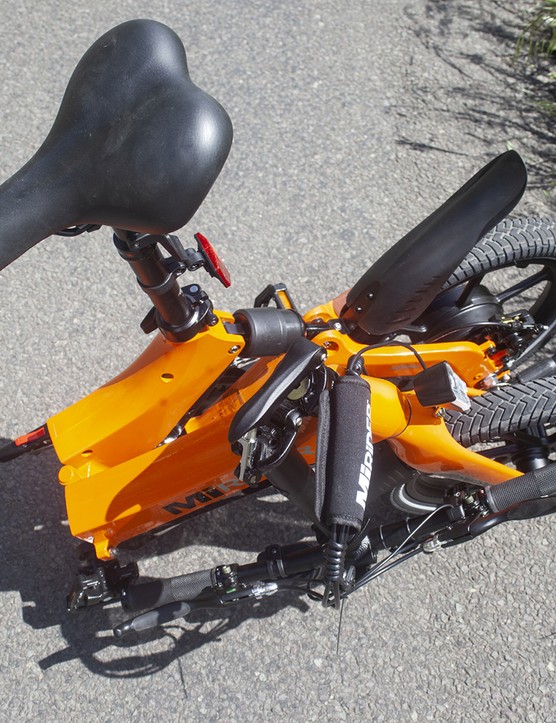 The two halves of the bike are held together by dropout mounted magnets when folded. 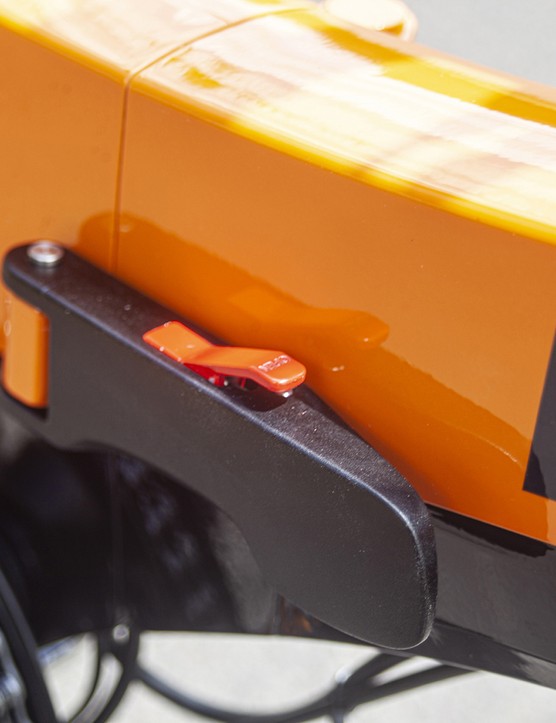 The One has a simple fold at the centre via this large hinge and lockable catch. 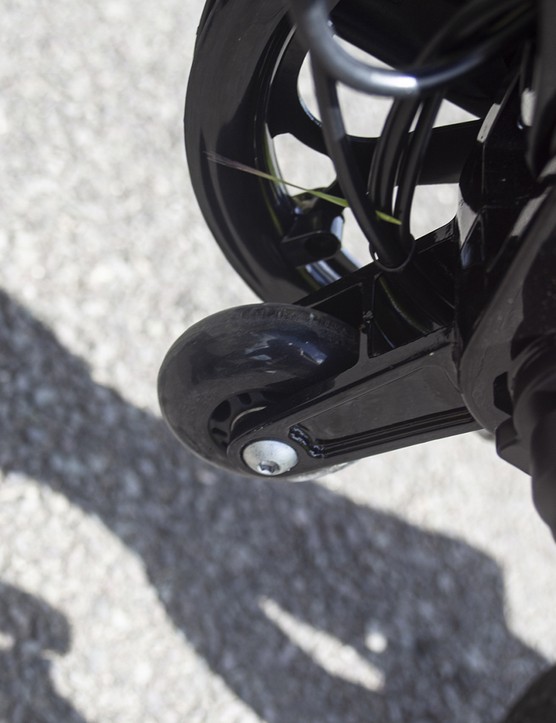 Mounted to the bottom bracket shell is this urethane skate wheel, which helps you to move and ‘trolley’ the One when it’s folded. 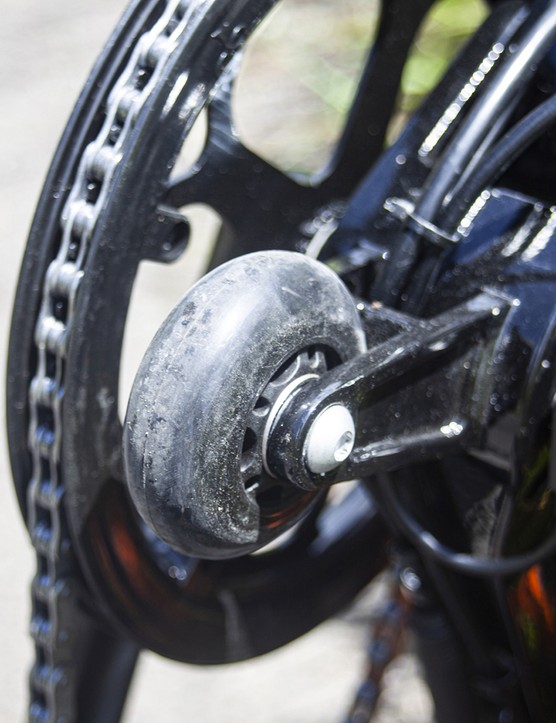 Another look at the urethane skate wheel.

The One certainly stands out against most folding bikes, even more so when compared to folding ebikes. The box-section magnesium frame sweeps back and up towards the seatpost and is mirrored by a rear swingarm anchored above the chainset, with an air-filled shock absorber.

This type of unified rear-triangle (URT) suspension may have gone the way of the Dodo on mountain bikes, but having the drivetrain contained solely within the back-end means a constant chainline with no chance of the chain being dropped (aided by the chainset with its dual chainguard). The last thing you want on a commute is oily hands from having to re-fit a slipped chain.

The constituent parts of the MiRider may be sourced from overseas, but each bike is assembled to order in the UK, and I was impressed with the attention to detail on what is a modestly-priced machine compared to the likes of Brompton’s Electric (from £2,715) or GoCycle’s GXi (£ 2,899).

Details such as the neoprene cable wrap in front of the bar make folding fuss-free and simple; the integrated mudguards do their job well, are sturdy and don’t hinder folding either; and the lever-actuated seatpost is quick to adjust and secure.

Lots of MiRider’s rivals could do worse than emulating design touches such as this. It’s a smart-looking frame, too, and is free of ugly welds.

The adjustability of the One is an added bonus. The telescopic bar/steerer and seatpost mean the bike will fit anyone from 5ft to 6ft 4in, according to MiRider.

I’m 6ft 2in and the One fitted both me and a 5-foot rider in my household, though a 6ft 4in person at the top of the range may struggle with saddle height because the seatpost was at its limit for me. 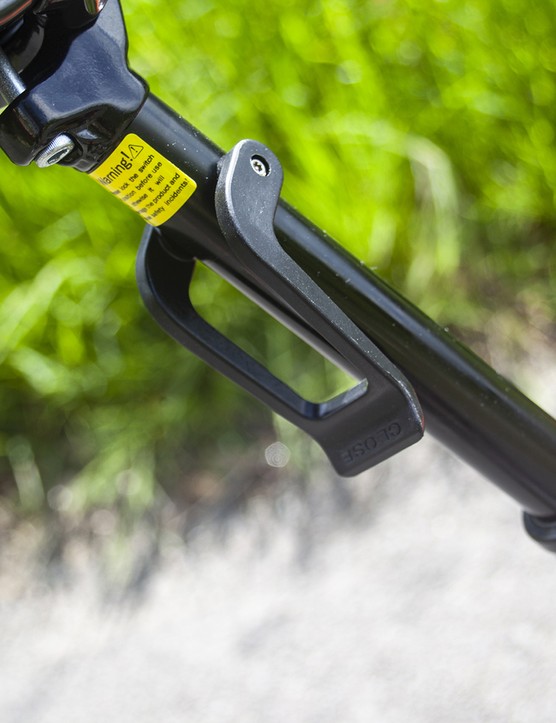 The telescopic seatpost adjusts quickly via this clever flip-lever. 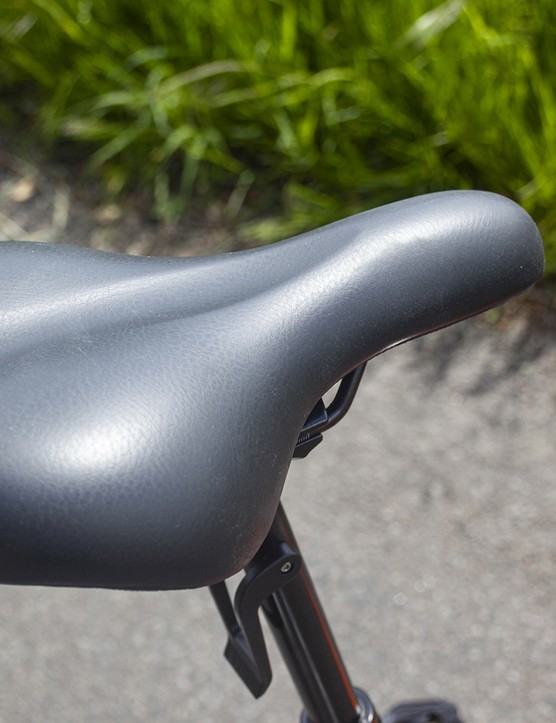 The large foam filled saddle isn’t as comfortable as its dimensions would suggest.

Jump on board the One and, well, it’s a nice place to be. The power assistance comes in smoothly and tracks your cadence well, though with 16in wheels and a 48/14t drivetrain (which gives you a 49in gear), don’t expect to motor along at high speed on the MiRider.

However, as a singlespeed machine, the gear is a fair compromise. It’s light enough to ascend pretty much any urban slope you’ll throw at it when you add in assistance, and you can spin along happily at around 15mph.

The assistance system is based around a 250-watt rear hub motor, encased within the cast alloy six-spoke wheel and controlled by a bar-mounted LCD head unit displaying distance, time and current speed.

You can also switch between different power levels or turn on the integrated lights by pressing and holding the up switch.

The head unit is actually the same one seen on the Emu Mini Folding ebike we also reviewed recently. Like the Emu, the MiRider One offers five levels of assistance, which may seem a little like overkill. I quickly found myself leaving the bike on level two for the majority of my riding time, only switching up on long inclines and down – or off – when heading downhill. 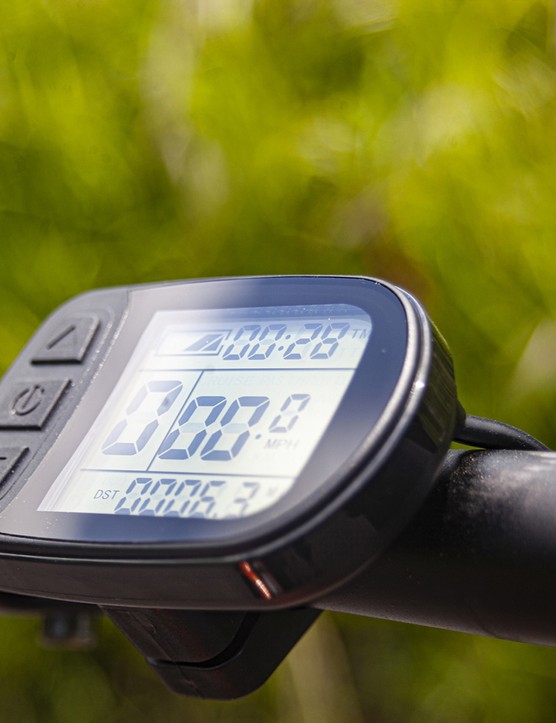 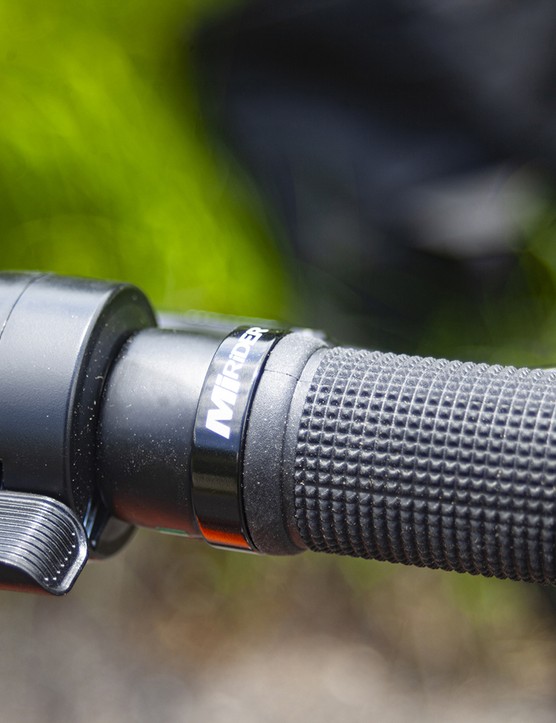 This thumb-operated lever activates the power boost, to help you get up to speed quickly and maintain pace on steep slopes.

When it comes to hills, the One has a smart trick up its sleeve. Next to the right-hand brake lever sits a big, thumb-activated lever – this is a power boost trigger.

This provides power assistance from a standing start to 4.5mph without pedalling. Additionally, regardless of which power assist level you are in, if you are constantly pedalling you can use the throttle to ‘boost’ you up to the legal electric bike speed limit of 15.5mph. If you stop pedalling at all that boost stops (in line with UK law).

The power boost provides a welcome helping hand on steep climbs. On one of my test rides, I purposely took the MiRider to a local climb that’s around a mile of undulating ascent, with the harshest part a 100-yard stretch where the gradient ramps up to 14 per cent. Impressively, the mighty-mini One’s motor never faltered in its assistance. 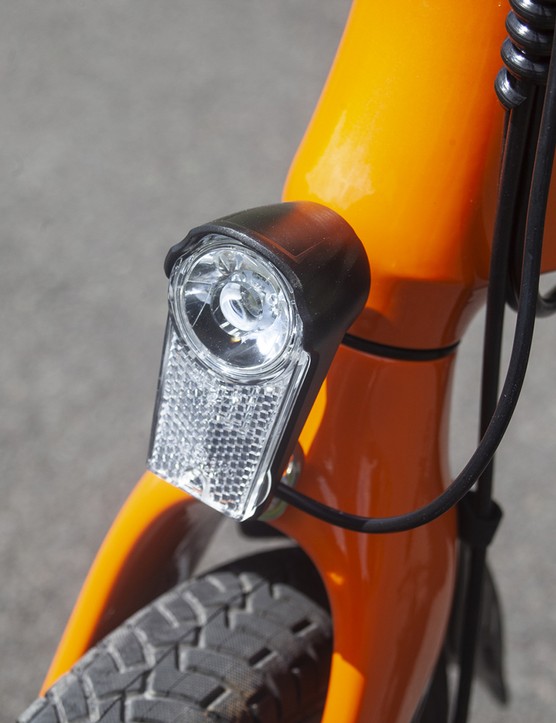 The integrated front light can be operated via the bar-mounted control unit. 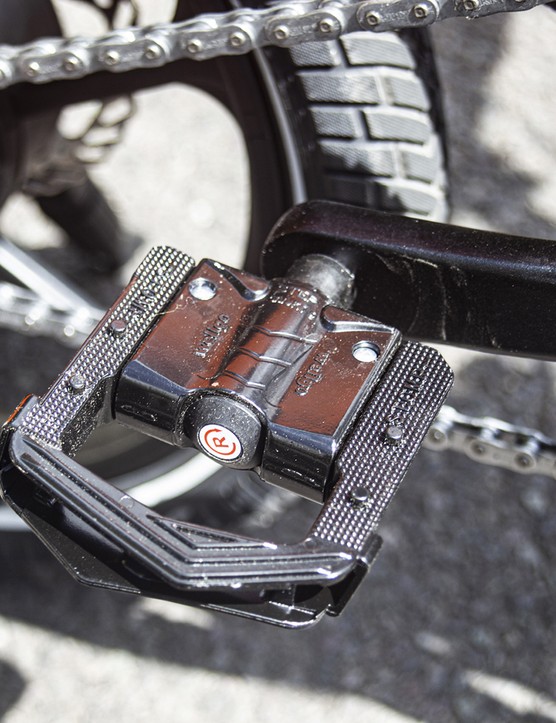 The metal-bodied Wellgo pedals flip up to save space when the bike is folded.

In terms of Range, MiRider claims up to 30 to 35 miles, depending on terrain, the level of assistance used and other factors such as rider weight.

Even things such as tyre pressure can have a positive or adverse effect on ebike range because rolling resistance is a major factor in efficiency – so make sure you stay on top of your maintenance.

I achieved between 18 and 29.5 miles on my test rides. The 18-mile ride involved lots of differing surfaces – tarmac, towpath and gravel tracks – and took in 804ft of ascent, something you’re normally very unlikely to do on a folding commuter bike.

The 29.5-mile ride was far more representative of a general day of commuting for many people, with only 345ft of climbing in total, and on predominantly tarmac surfaces.

Still, the One has a relatively low range compared to most full-sized ebikes, but that shouldn’t be a reason to dismiss it, particularly for commuting duties.

The charger (so often a big, heavy, bulky item) is also minimal, weighing just 374g (including UK plug lead) and measuring only 135mm x 65mm x 30mm, so it can be stuffed in your backpack if needed.

It took on average 2 hours 45 minutes to charge the battery from empty, in line with MiRider’s claim of 2 to 3 hours. The charge port is easy to access on the side of the frame’s main spar. 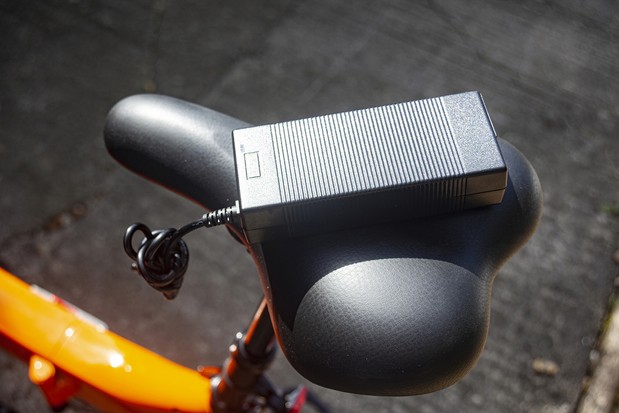 The MiRider’s charger is compact enough to carry with you. Warren Rossiter / Immediate media

Handling wise, the One has the same issues as most small-wheeled folders, in that the lack of wheelbase length and relatively upright head angle mean it can feel a little twitchy at first.

That said, slow-speed manoeuvrability is excellent (just what you need for urban riding) and the 1.95in slick tyres do help provide confident grip on most surfaces.

The large tyres and rear suspension mean comfort is excellent for a bike like this, even though MiRider, like most of its rivals, has opted for a big, soft-padded foam saddle that looks like it’ll be comfortable, but isn’t for any ride over 30 minutes or so.

I switched out the saddle for a lighter, smaller, better-designed favourite of mine and found a big improvement – and saved a heap of weight with it (more than 300g). 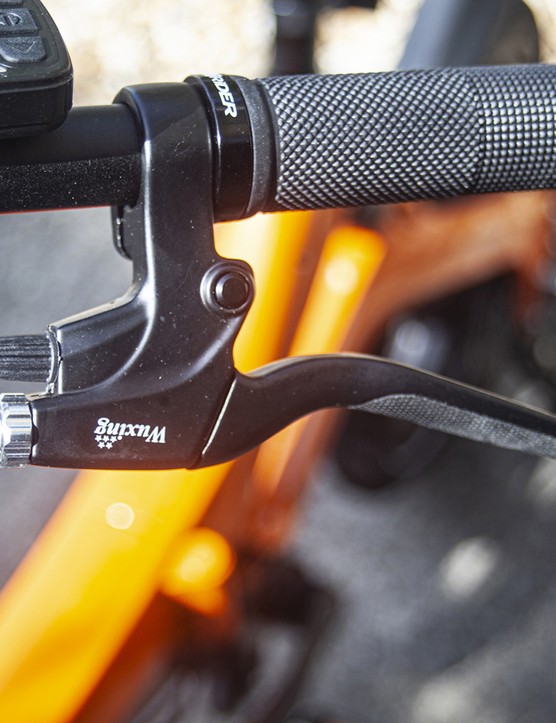 The second cable is a shutdown function; when you apply either brake it cuts the e-motor assistance. 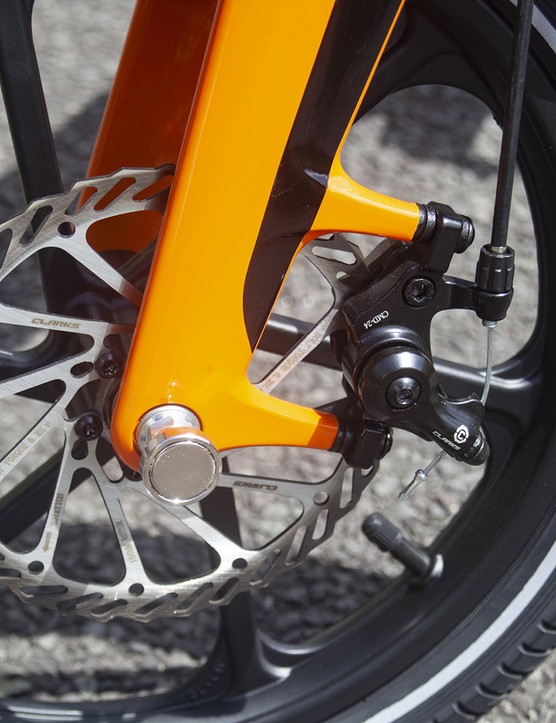 The One has cable disc brakes front and rear. The Clarks units are paired with 160mm rotors, all controlled by large Wuxing-branded brake levers, which have a textured, all-weather surface – a nice touch.

They do have a bit of play up-and-down as the lever travels, however, and feel a bit… wobbly. Out of the box braking felt somewhat ‘squishy’, though a quick cable tension adjustment cured this.

The levers have a second cable exiting the lever body alongside the brake cable. This e-cut out cable means as soon as you pull either brake, the system senses you are slowing and cuts the e-assist immediately; a clever bit of additional safety that also helps with the One’s smooth assistance. 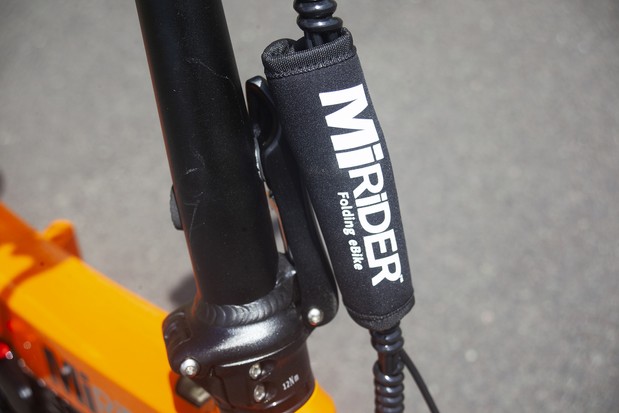 The fold is as simple as it gets, with a large central hinge (with a safety lock) halving the bike’s length. A pair of magnets on the front and rear then lock the two folded haves together. From there it’s a case of folding down the bars and lowering the telescopic seatpost.

Underneath the bottom bracket is a single skate wheel (that sits proud of the chainring), which allows the bike to be easily manoeuvred when folded. You can also ‘trolley’ the folded bike by extending the seatpost.

The 18.7kg weight means it isn’t the lightest around – something to consider if that’s important to you – but it’s easy enough to move around, and the clean, quick fold – you can easily fold or unfold the One in less than a minute – makes it a useful machine for mixed-mode commutes.

MiRider offers a whole host of spares online, including a rear rack and even a dry-bag to store the bike in. There are also replacement battery packs (£200) should you run through the 1,000 charge cycles the stock battery is rated for. 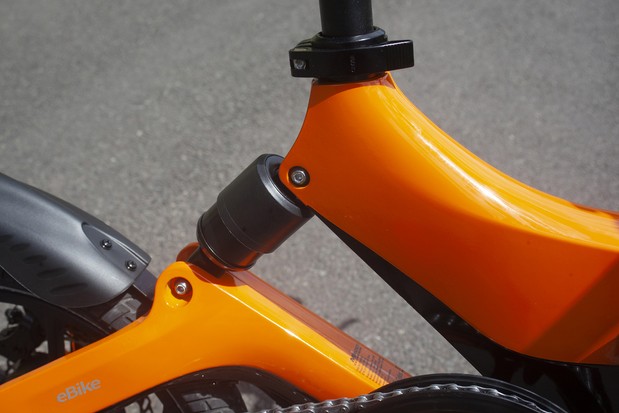 The One’s back-end is cushioned with an air shock. Warren Rossiter / Immediate media

All things considered, the MiRider One is a bike that matches its funky looks with a fun, practical ride.

In terms of improvements, I’d like to see an optional longer seatpost for taller riders included in the box (MiRider offers an aftermarket option), and perhaps a geared bike further down the line (say, a 3-speed Nexus drivetrain), just to add a bit more versatility.

However, as a cost-effective, power-assisted folder for short rides or mixed-mode commutes, the MiRider One is arguably very hard to beat.