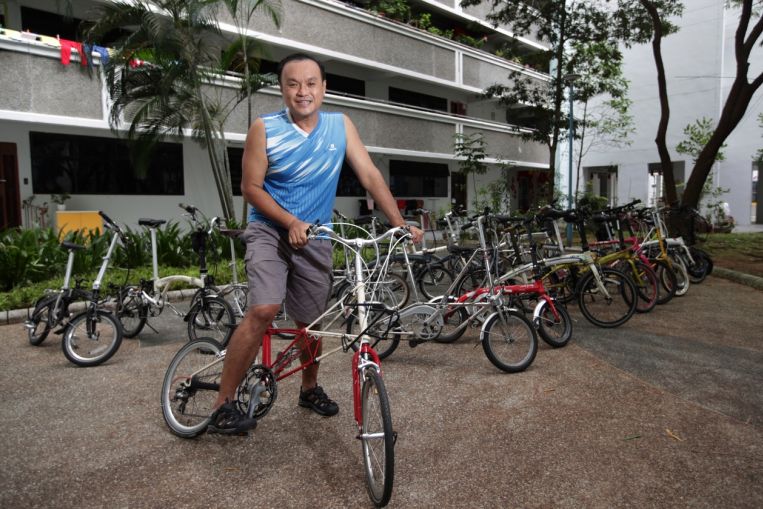 SINGAPORE – Cycling is a family affair for 46-year-old Jenson Tan as he, his wife and three teenage children are all avid cyclists.

They have more than 20 bicycles at home. But no, they do not live in a house with a garage, but a five-room Housing Board flat.

They are able to store so many bicycles as these are foldable ones.

“The advantage of such bikes is the fact that they can be folded and stored easily, especially in Singapore ,where most of us are living in apartments,” says Mr Tan, head of service management of Asia at a telecommunications company,

Affectionately known as foldies, these bikes have become a hot commodity in Singapore in the past year. They are so popular that demand has outstripped supply as more people in the country turn to cycling during the pandemic.

At sports retailer Decathlon, folding bikes have been sold out since Feb 15 last year “as the cycling industry is facing a huge component shortage”, says its city sport leader (cycling), Mr Syed Syafiq.

“We expect this to continue even in 2022 and 2023. Given that our bikes are extremely high in demand, the stock we receive is also sold out very quickly, sometimes in a matter of a few hours.”

Sales of folding bikes at Decathlon Singapore has jumped by 67 per cent since the pandemic hit Singapore early last year.

On online shopping platform Carousell, sales of bicycles have been increasing since the fourth quarter of last year and foldies, in particular, are highly sought after.

Says Mr Ng Chee Soon, managing director of Carousell Singapore: “The most popular type of bicycle on Carousell in Singapore is the folding bike.”

British folding bike company Brompton was the most searched bicycle brand on Carousell, while Dahon, a well-known folding bike maker that has its headquarters in the United States, is at No. 4.

Local demand for Bromptons is so high that customers have to make appointments before they can buy a bike at the brand’s Funan mall store, its first flagship store in South-east Asia.

All appointment slots for this year have been taken up and bookings for next year is expected to start only in October.

Bike seller DC Pro, which started selling bikes last August and has sold more than 800 units, estimates that prices of many foldies are 20 per cent higher than before the pandemic. They now range from $250 to more than $6,000.

DC Pro co-owner Wayne Lui says: “Eighty per cent of our bike sales are of folding bikes. The older riders go for bikes that are light and easy to fold in case they want to continue their journey on public transport or in their cars.

“The younger riders tend to go for aesthetics and will modify their bikes with accessories.”

In tandem with the boom in bicycle sales, online cycling groups here are also seeing a surge in members.

Mr Tan started Facebook group Singapore Folding Bike with fellow foldie enthusiasts Wendy Chau and Wilson Low in 2018 as a private group. In March last year, they made the group public after noticing that more Singaporeans are getting into foldies and cycling.

From just three members, the group now has 14,800 members. Many posts are from newcomers seeking advice on the type of folding bikes to buy.

There are other smaller groups on Facebook dedicated to foldies, including ones for specific bicycle brands and models.

Mr Tan and his group’s other moderators estimate that there are about 100,000 active folding-bike cyclists in Singapore now.

The supply shortage has not put off foldie fans such as Mr Mannix Pangilinan, 42, who does not mind waiting months to get one. He ordered a Brompton last November and expects to get it next month.

The bike, which he estimates will cost $4,500 to $4,800 after accessories and customisation, will be his sixth Brompton. The other bikes, which he bought before the pandemic, cost $10,000 to $15,000 each after customisation.

The father of two says each of his bikes is unique.

“You can personalise it to your liking. It’s like an art piece, in a sense.”