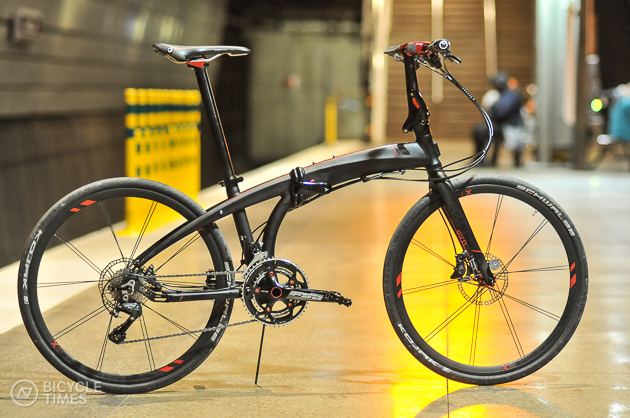 Tern’s all-new Eclipse X22 folding bicycle is scheduled for release in January 2016, with a suggested retail price of $2,500. I’ve had the pleasure of riding several folding bikes over the years, but this is my first time reviewing a folder with full-size wheels.

I’ve already come to appreciate the added feeling of security that the 26-inch wheels provide when rolling over uneven pavement or crossing railroad tracks. The slick Schwalbe Kojak tires are designed to roll fast, but they do have puncture protection. I like that.

Another advantage of the 26-inch bike—compared to tiny-wheeled folders—is speed. The 24.8-pound Eclipse X22 has plenty of zipping for fast-paced recreational rides.

The 22-speed drivetrain ranges between 30 and 112 gear inches. That’s plenty for my style of street riding. 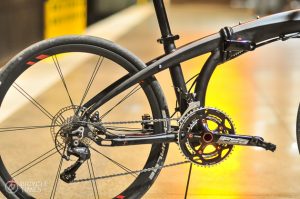 The Tern Physis 3D handlepost has a large clamp that locks down securely. The Syntace VRO adjustable double-clamp stem is stiff and convenient to use. Overall the bike offers a very solid-feeling control center. 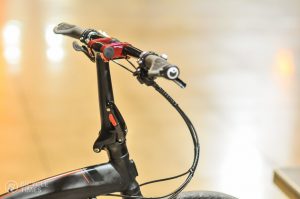 The fold is quick and easy via cam-actuated levers on the mainframe and the handle post. The folded bike is secured by a magnetic clasp on the frame and a rubber strap keeps the folded handle post in its place. If you fold the frame but leave the stem erect, you can roll the X22 along on its wheels rather than carry it.

We’ll have a full review in the next issue of the magazine, Issue #39; hurry up and subscribe if you haven’t yet. In the meantime, you can find more information on the Tern Bicycles website.