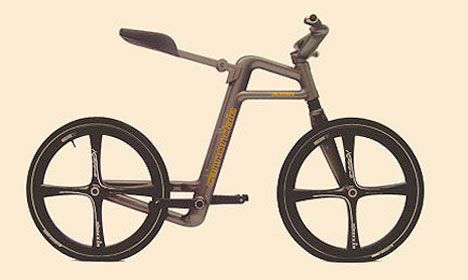 Have started going through a long backlog of tips that haven’t yet seen the light of day. And noticed this one. Dutchman Philippe Holthuizen (who sent the information) and Spaniard Rodrigo Clavel were Masters students studying transport design at the Elisava Design School in Barcelona. (We noted Elisava in a post of ecodesign university courses). The guys were selected to design a bike for Cannondale that would appeal to urbanites within the 20-35 years bracket. The Jackknife resulted. “For clean aesthetics and low maintenance the drive system is hydraulic, and for storage and easy handling in elevators and on public transport the bike is also foldable. The folding mechanism shows a unique and highly innovative approach, with the central tube twisting through 180Â°.” (The hydraulic drive sounds more radical than the folding aspect, but seems glossed over a bit.) The bike has integrated lighting and other details were in keeping with signature Cannondale aesthetics. The two wheeler has been doing the rounds of transport trade shows as a ‘concept’ bike, with the students sponsor indicating it may not be produced, but its ideas incorporated into future designs. Philippe initially sent us a link to the German site ::Radsport, but we see that in the intervening time the story was picked up by Bicycle Design and Car Design News.