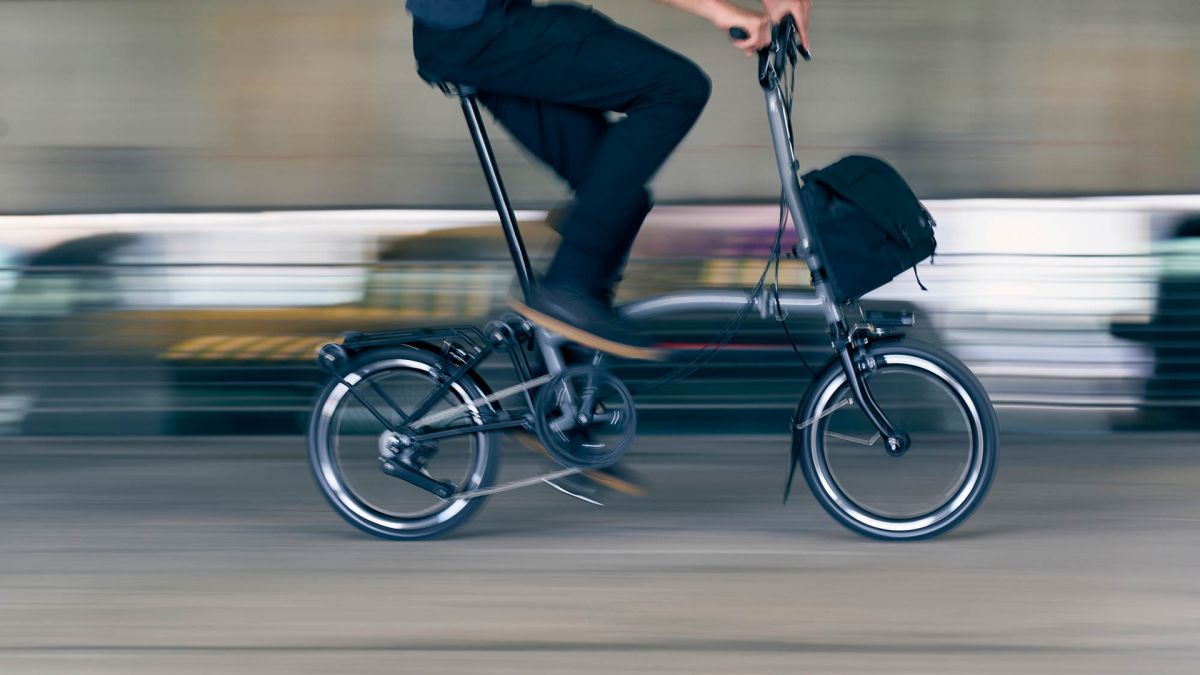 Brompton recently released the T Line, which is a more or less complete reinvention of the Brompton folding bike, done in titanium. A complete reinvention, that is, apart from the core look and design of the bicycle. That’s no surprise. I’ve been to Brompton’s HQ, and there, they keep an early prototype of the bike, done by inventor and company founder Andrew Ritchie. While it looks decidedly rough – as you would expect for a prototype knocked up in the 1970s in a former landscape gardener’s flat – the main elements of the Brompton’s scaled-down-bike look and hinged design are clearly visible.

So when I sat down to talk to Brompton’s Chief Design and Engineering Officer Will Carleysmith, I felt obliged to ask if the brand ever considered starting again from scratch and, so to speak, reinventing the wheel. The Brompton folds beautifully and is way more enjoyable to ride than you would expect, to look at it. However there is no getting away from the fact that it does look decidedly odd. Full disclosure: I also once rode one gently off of a kerb into the road, where its front wheel fell into and through the grate of a storm drain, which pretty comprehensively destroyed it.

Obviously, I was not expecting Will to say, “Yeah, we really must get around to changing the look and feel of the iconic product that our entire company is based on,” and [spoiler alert] he didn’t. However, he had some interesting things to say, and was extremely bullish about the reasons why Brompton will probably never stop using Andrew Ritchie’s core design.

You can read the full Brompton interview with Will if you want to know more about the brand’s latest bike, the ultra-light, titanium Brompton T Line. He also had some thoughts on the likelihood of a Brompton electric scooter – [spoiler alert] not very likely – and the importance of exercise for the world’s wellbeing.

Will Carleysmith of Brompton: design Goldilocks

When I asked Will whether he and his team had ever thought about changing the  core folding mechanism of the Brompton, he admitted that it was something that was often thought about, saying, “we have a whole bunch of curious, technically interested engineers.”

However, in Will’s opinion, Brompton inventor Andrew Richie “got it really right first time,” and as a result the “fundamentals and silhouette DNA” are hard to improve on.

If you look at other folding bikes on the market, that is hard to argue with. Because while the Brompton may look a bit odd, it is like a Pinarello compared to most of its mass-market, folding rivals, even the very newest ones. What about the more experimental likes of the Tuck bike though, where the wheels are able to be of  normal bike size, because they also fold up?

Will was adamant that this was not likely to be an ideal solution.

While the Tuck’s wheels, which telescope into themselves once you remove three large clips, are undoubtedly clever, Will feels that, “the complexity that comes with folding bike wheels and the weight that comes with it, and all that challenge, it doesn’t really work in a city bike.” In other words, it’s too much time and effort when you are running around Brompton’s native London or any other big city, moving from public transport to street to the office at the end of your commute.

Will’s reply: “I would probably argue that any bike with the same width of tyre, you might have had the same problem.” In fact, the Brompton bike has “a Goldilocks wheel size,” because, “if you go smaller, it starts to not be a great bicycle. If you go bigger, you start to have problems keeping the folded bike compact. Andrew’s design does a phenomenal job of wrapping that wheel into a sensible size, with a good height in the saddle.”

This is hard to argue with. Brompton’s may not look like ‘normal bikes’ but when you are on one, the riding position does feel right. The little wheels make it feel very nippy as well, due to some quirk of physics or perception. Probably the best electric bike you can buy, if money is no object, is the similarly premium GoCycle G4i. That visibly takes a lot of design inspiration from the Brompton.

The T Line comes with and without mudguards and gears –but either way, it sure looks like a Brompton

So don’t expect a major change of look for the Brompton any time soon. “There are probably fractional wins to be had by changing the design, but it’s a classic for a reason,” Will told me. “There’s a new folding bike company coming along every fortnight, with a different approach. Are they better than Andrew’s design? Probably not.”

It’s hard to see where Brompton can take the original design next, given Will’s stated intention to “take that silhouette and get the lightest, best performing system we can, into the lowest possible weight of the bike.” The T Line is surely about as light as the bike can go, unless they eventually decide to make a carbon fibre one –  and there are some doubts that carbon can stand up to the many years of folding and unfolding that a Brompton has to go through.

I expect we’ll see a titanium version of the Brompton Electric in due course, but what then? Maybe there really will be an electric scooter or other, completely new approach to urban mobility from the brand at some point in the not too distant future. We’ll see.

There are several more affordable Brompton models these days… but the Brompton T Line is not one of them, alas. Nor will it be straightforward to buy, at least at launch.

The bike is exclusively available via a ballot system on Brompton.com and through selected Brompton Junction stores in London, New York, Shanghai, Singapore and Paris, the bike will be available in two specifications, each with the option of a low and mid-rise handlebar fit.