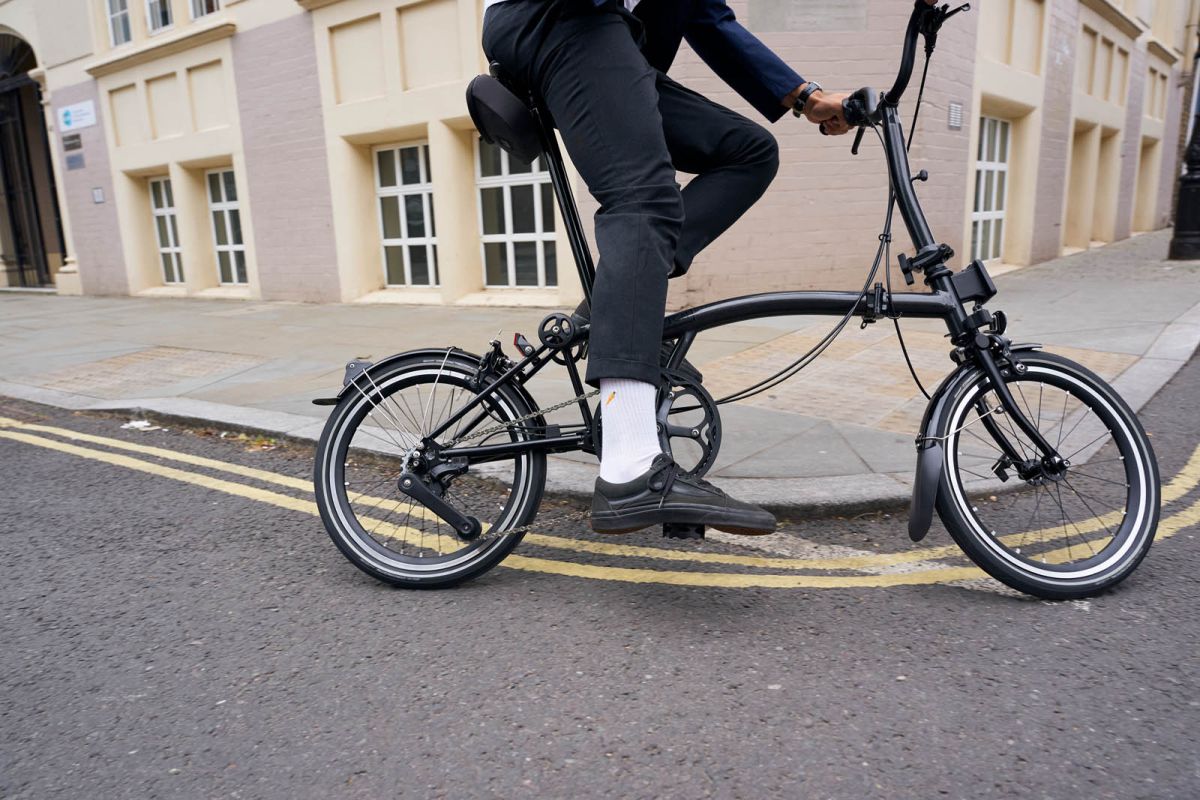 British folding bicycle brand Brompton has released its P Line bike, a new lightweight model that’s designed to be easier to carry and faster when ridden – being 1.55kg lighter than the all-steel equivalent.

Brompton first delved into the pursuit of weight-reduction in 2005 when it launched the Superlight model. Seventeen years later and the transformation continues with the P Line.

“The new Brompton P Line is a leap forward from the Superlight, it is faster to ride, lighter to carry and easier to move around the city in every way,” says Will Carleysmith, Brompton’s Chief Design & Engineering Officer. “Significant weight savings and performance improvements have been achieved through the entirely redesigned rear frame and lightweight components including the compact 4-speed gearset.”

The redesigned frame maintains the characteristics which make Brompton models some of the best folding bikes. However, it features a titanium rear end and fork as well as a new suspension block. The result is a frameset that’s not only 700 grams lighter than its steel equivalent but supposedly better at absorbing any road chatter. Brompton says that the blend of the redesigned suspension and the titanium material “maximises efficiency and responsiveness by shifting pedal power to improve control and handling performance.”

As Carleysmith states, to help shave weight from the finished product, Brompton not only addressed the frame but also the P Line’s componentry. It uses lightweight aluminium where possible, such as handlebars and a chainset constructed from 6061 alloy.

The wheelset was also built from the ground up, with the aim to be lighter than ever before but also more durable and, interestingly, more practical. The wheels come fitted with hex key axles and a new hanger mount, which Brompton says improves the ease of road side maintenance. There’s also a new hub designed to accommodate the new 4-speed gearing.

The gearing appears to epitomise the general ethos of the P Line; light and fast, achieved through improved engineering. It’s been optimised, Brompton says, for commuting by bike in the city and features a lightweight reach mech that weighs just 60 grams while widening the gear ratio of Brompton’s 2-speed offerings by some 60%.

A holistic approach to creating the P Line can also be seen by the use of weight-saving parts and accessories such as lock-on foam grips that weigh 42 grams, Tuboilto inner tubes and a saddle with a carbon reinforced base.

The appeal of a lighter Brompton is no doubt obvious to any user. While the brand has become a by-word for portable city bicycles, lugging a 100% steel-framed machine on and off trains, up flights of stairs and into taxis can have its drawbacks. The P Line aims to address this not only with sub 10-kg weight but also a new locking system that Brompton states will improve portability. In simple terms, the bike can now be locked in two positions: fully down for the best storage, say on train carriages, or halfway up for improved maneuverability through tight city spaces.

But the P Line is still a Brompton. It’s designed to be a practical bike created to navigate our towns and cities. While ‘lighter and faster’ is music to pretty much every cyclist’s ears, a folding bike such as this also has to be able to take a beating and weather a storm. Brompton devotees should therefore be happy to see that the P Line still incorporates a steel mainframe, stem and seatpost. It also comes with full mudguards, puncture-resistant Schwalbe ONE tyres, a pump and rechargeable front light and rear battery lamp.

The new Brompton P Line costs £2,100, weighs 9.65kg and will be available in two colours: Storm Grey and Midnight Black.