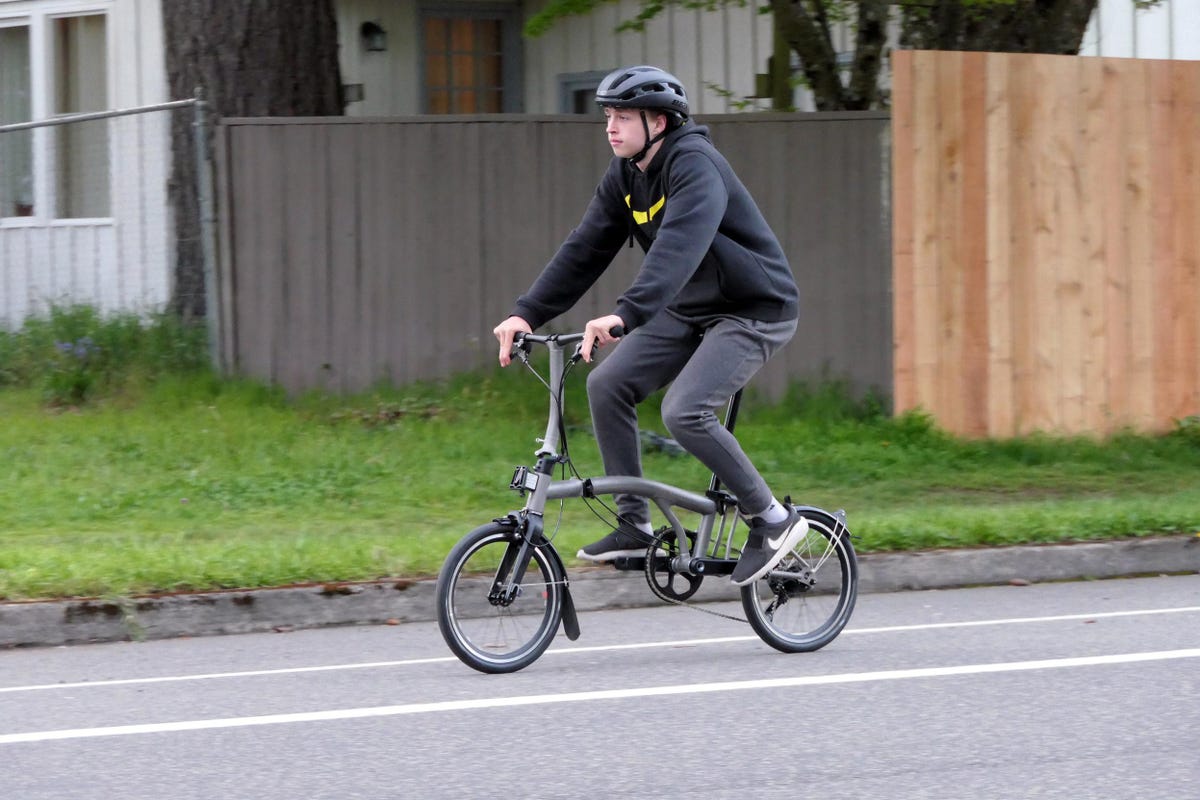 Even my ebike-addicted teenager had good things to say about the ultra-light Brompton T Line Urban’s … [+] cleaver construction and ride quality.

UK bicycling icon Brompton has put millions of people on two small wheels – wheels they can then fold up into a neat bike ball of sorts that tucks under a desk, behind a door, rolled like a suitcase or even tucked into a carry bag. There’s even an electric model I torture tested on the hills of San Francisco last summer.

Now, Brompton has rethought their famous foldie and following a lot of tweaks, fine tuning and a focus on performance, the company is releasing small numbers of the new T Line of bikes made almost entirely of titanium. If you thought Brompton’s bikes were light before, the new T line almost borders on the ridiculous. Brompton was kind enough to send me a $5,020 4-speed “Urban” T Line model for review despite the small number of T Line bikes being created.

The T Line utilizes titanium and carbon fiber to shave nearly 40 percent off the weight of it … [+] siblings.

If you were expecting a radical redesign of the Brompton’s famous three-hinge folding design and curved backbone frame, I happy to disappoint you as thankfully, the T Line bikes fit right in with the rest of the Brompton models. To be clear, this is not an electric bike or ebike, you have to pedal it like an ordinary bike.

But what’s extraordinary about the T Line is the weight – or the lack of it. Since Portland features many hills, I requested the Urban model with a 4-speed derailleur. There is a second T Line model, the One, with, of course, a single gear. The Urban clocks in at 17.4 pounds while the One variant shaves off another full pound by losing the three other gears. I have motorcycle tires that weigh more.

As you can see, the Brompton bikes are slight and appear to be simple, but they are wonders of modern and innovative design. I was a bit skeptical of how a 17-pound folding bike would perform under the weight of a 6-foot-1, 230-pound rider, but Brompton has been refining this same basic design for nearly 50 years now and if anything, the strength of the titanium construction has added a measure of stiffness beyond that of their already over-achieving other models. After quickly unfolding the Urban, which now takes me about 20 seconds since I’ve had some practice, I set the seat height and pointed the Brompton into Portland’s network of bike lanes.

At first, the 4-speed derailleur was a bit balky but a small adjuster on the handlebar shifter quickly sorted that out and it shifted cleanly and quickly for the rest of my riding. Braking is done through side-pull road-bike style brakes and despite the small 20-inch wheels, the Urban doesn’t feel very flighty or sketchy while underway. It rides like a bike much larger than it is – and much heavier. Fortunately, they also added a very strong steel-armoured carbon seat post to the T Line to save even more weight and while I may look like circus bear while riding it, it’s a genuine joy to ride. As you might well imagine, it’s also a serious conversation starter, especially here in The States.

Small wheels make for quick turns, but the Brompton still feels solid and confident at speed.

Arriving at a tall hill, I thumbed the newly revised 4-speed driveline into 1st gear and started up the grade. I’ve been riding much heavier ebikes for so long now I’ve come to expect bit of huffing and puffing as I head up the pavement with the help of the electric assist, but with the e-free titanium Urban, I made unexpectedly good progress because of the practically-not-there weight. Once at the top, I pointed it back down the serpentine hill and despite speeds likely close to 30mph, the Brompton continue to track confidently through turns and the brakes scrubbed off speed with no fade or drama.

But the Brompton Urban really shines best moving through the urban jungle, tucking around cars too close to the bike lane and popping up onto sidewalks with agility and stability. Far from being novelties, Brompton bikes are very much fun to ride while also being highly practical. Brompton sent along a spacious and waterproof $335 “Game Bag” bike bag (above) that mounts to a quick-release above the front wheel of the Urban, and I was able to fill it with camera equipment, groceries and takeout, then simply push a lever to release it once the ride was over and use it like a shoulder bag. True convenience.

$5,000 is a lot of money to spend on any bicycle, but the Brompton T Line Urban earns its keep with real-world usefulness, a polished, innovative design now renewed and refined, and that incredible light weight. My bike also included useful fenders and a bike bell, but no lighting, and it would be nice to see every Brompton (and every commuter bike) include LED lighting as standard.