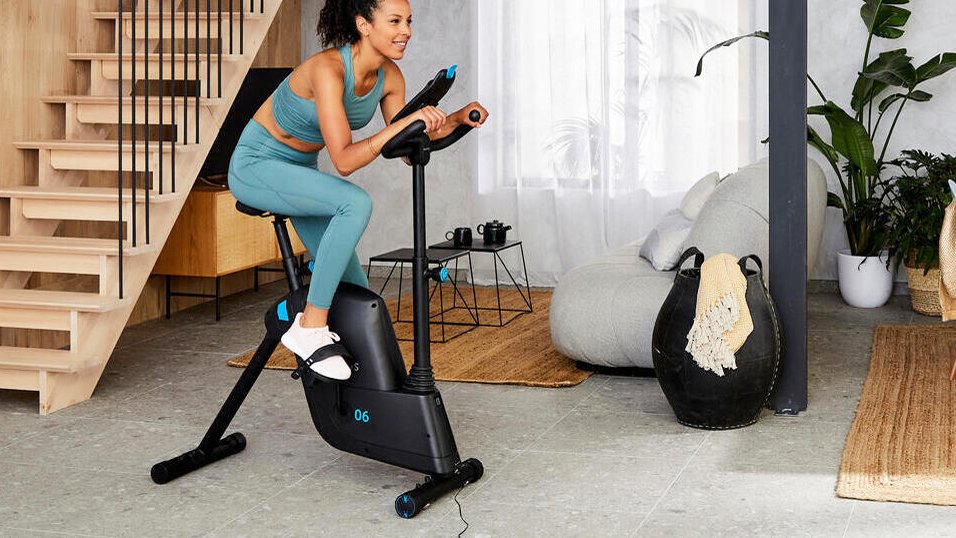 The best folding exercise bikes have many of the same advantages as standard fixed exercise bikes, without their big space-hogging downside. With a fold-up exercise bike, you just hop off, fold down the frame, and slip it under the sofa or into the cupboard. If the bike has a really well-designed folding mechanism, putting it away is even easier than locking up an outdoor bike.

There are downsides, compared with non-folding exercise bikes. To oversimplify slightly, it’s a trade-off between power and convenience. In order to be easy to fold and store, foldable exercise bikes have to be lightweight and low on chunky features such as the large flywheel that gives high-end exercise bikes so much resistance. But the best folding indoor bikes do offer a good range of resistance levels, usually achieved with magnets, so you can still get a pretty challenging workout.

To find out more about magnetic resistance, easy foldability and other key features, read on. Or, to go straight to our recommended best foldable exercise bikes, skip down the page.

READ NEXT: Best electric scooters to get about town

How to choose the best folding exercise bike for you

Why do I need a folding exercise bike?

That’s not to say they’re cheap n’ cheerful second-rate bikes, though. A couple of the folding bikes in our rundown will set you back several hundred pounds, and for very good reason. They offer an exceptionally well-designed folding system; accurate tracking metrics (which you can follow via a built-in console); and well-designed comfort features, such as highly adjustable seats and backrests.

What kind of resistance can I expect from a folding exercise bike?

Folding exercise bikes tend to be more lightweight than standard upright exercise bikes and spin bikes, and as a side-effect of this they offer less resistance. In other words, they don’t give you as much opportunity for a tough workout.

To get around this, the best folding exercise bikes also offer a magnetic resistance system that uses magnets to slow down the flywheel and make you work harder. You can switch between preset resistance levels to progress from leisurely, long-distance cycling to high-intensity sprints and moderately high-resistance hill work.

This makes folding indoor bikes ideal for beginners, cross-training athletes (runners, for example) and for anyone recovering from injury. You can work through the resistance levels to suit you and your ability, and track your progress as you go.

Another great advantage of magnetic resistance, compared with tougher friction resistance on large exercise bikes, is that it’s very quiet. You can really go hell for leather without making a noise, which your neighbours in adjoining flats will appreciate. Magnetic resistance is also smooth, and requires less maintenance than standard flywheel resistance.

What other features should I look for in a folding exercise bike?

A good choice of magnetic resistance levels is key, but here’s what else to look for when buying a folding exercise bike.

Easy folding: A good folding mechanism is arguably as important as resistance in a fold-away bike. The best folding bikes are easy to fold down to about half their size, and then quick and smooth to unfold again. Some even have castors that let you wheel the folded-up bike into place.

Console: The digital display should have all the tracking features of a basic bike computer: distance today, distance total, speed, calories burned and so forth. Most are battery-operated, but a few have a mains cable. Some come complete with a choice of fitness programmes, built-in virtual map apps, and support for the manufacturer’s family of fitness apps (for example Domyos). Look out for separate device holders, too, so you can stand your own tablet or phone on the handlebars securely.

Pulse grips: Many exercise bikes, folding bikes included, have grips on the handlebars so you can monitor your heart rate while exercising.

Back rest: A couple of our recommended folding exercise bikes have back rests (included or optional extras) that allow you to sit back and pedal at a different pace. This almost recumbent-style position is a great option in between intense bursts, and allows you to work different muscle groups.

Height and weight range: Folding exercise bikes don’t tend to support quite as much weight as non-folding bikes, with 110kg (242lb) about the maximum, although one of our recommended bikes will happily accommodate up to 136kg (300lb). Short and tall people may struggle, with 5-footers (including me) and over 6’2″ slightly beyond the ranges of seat height of most consumer stationary bikes.

READ NEXT: The best upright and indoor exercise bikes to buy

Ultrasport’s F-Bike seized the title ‘best folding exercise bike’ in our round-up of the best exercise bikes you can buy. It still is – and it’s one of the cheapest.

There are now several F-Bikes (F for folding), starting with the basic 150 model and moving up to the F-Bike Heavy (which supports up to 130kg) and F-Bike Work (with built-in laptop tray). They all now have a curved shape that makes them even more reassuringly solid than before.

The F-Bike 200B with wonderfully comfy backrest is currently the best value of the range. It folds down quickly and easily to just 57 x 138cm, and boasts all the main exercise bike features, such as a built-in LCD display for tracking basic metrics (including pulse via handlebar sensors); an adjustable seat that’s unusually accommodating for shorter female cyclists; and eight levels of magnetic resistance.

Don’t expect a punishingly tough workout, but users report a satisfying range of resistance, plus smooth, quiet action and accurate tracking. In a nimble 16kg package that looks stylish and feels robust, this is a superb buy at less than £120 for the white/orange model (pictured). 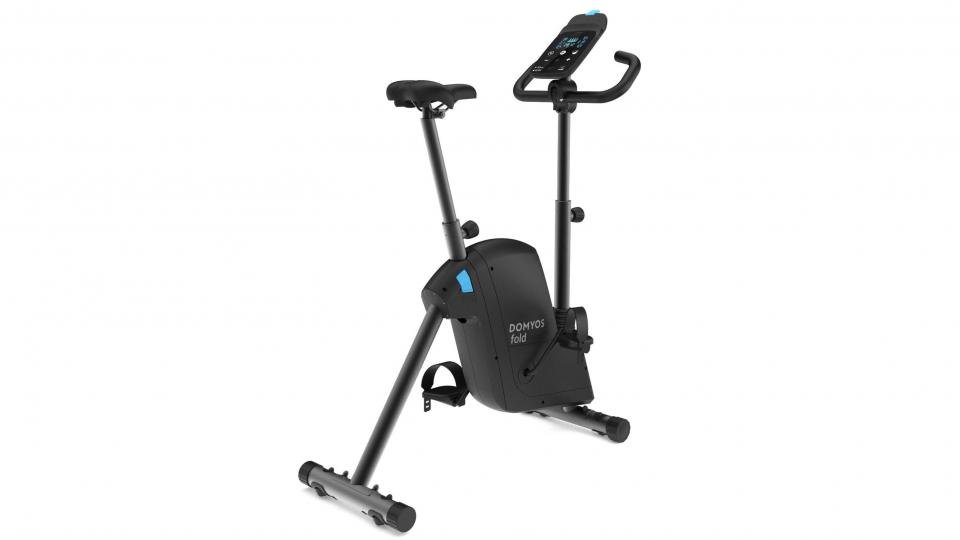 The EB Fold, by indoor fitness kit specialist Domyos, is one of few folding exercise bikes to use friction resistance. At 6kg the flywheel is lighter than in most fixed exercise bikes, but it’s an unusual feature in folding bikes, and you’ll appreciate it if you want control over the toughness of your workouts.

The flywheel does make the EB Fold a little heftier (32kg) than other folding indoor bikes, but the bike takes seconds to unfold and fold down to about half its full size, so it’s hardly a beast.

The other big attraction here is the digital display. Not only does it let you set weekly goals and include a belt for monitoring heart rate, but it also supports compatible apps such as E-connected and the fabulous Kinomap, which lets you travel through real scenery in sync with your distance and speed. 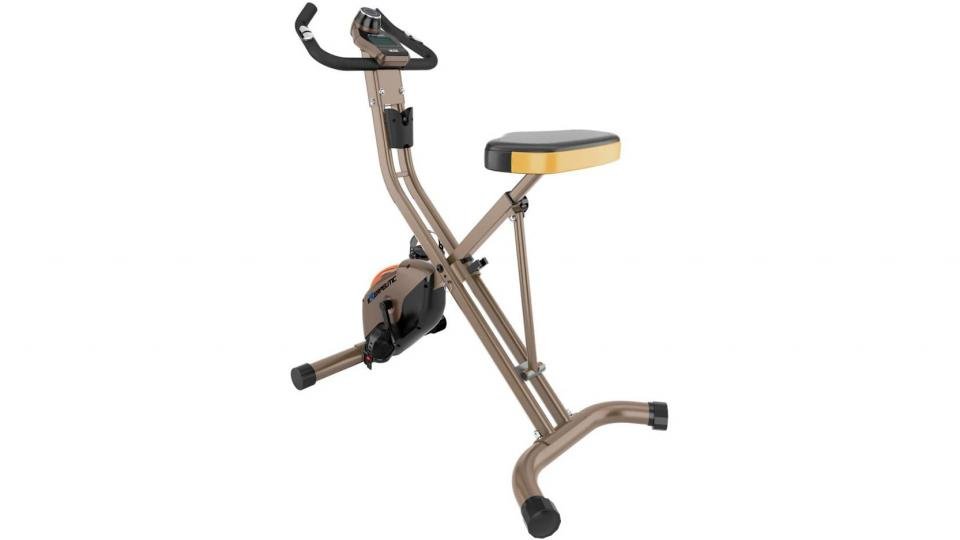 The headline attraction of Exerpeutic’s Gold 500 XLS bike is that it supports up to 181kg (400lbs) and 6’6″ cyclists, which is almost unheard of in the folding indoor bike world. Don’t stop reading if you’re tiny, though – this bike is also comfy for cyclists under 5′ (such as your reviewer), and users of all shapes and sizes will love the large, comfortable padded seat.

The resistance is magnetic, but users report that the bike’s solidity enables them to really challenge themselves on the high resistance levels, which go as high as most users would want them to. You also get an LCD display for tracking metrics, and castor-type wheels to help you put the bike away when folded down. 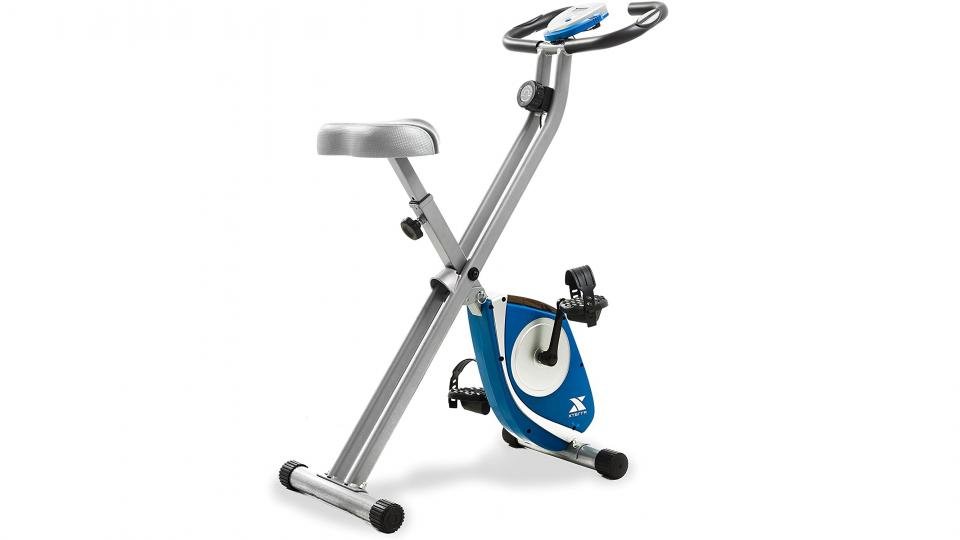 Most exercise bikes can be a stretch if you’re under about 5’3″, but this one comfortably accommodates riders less than 5′ tall. It’s also extremely small when folded (a mere 46cm square footprint), but feels very sturdy and durable, thanks to its low centre of gravity, thick steel tubing, 1.5kg flywheel and three-piece pedal crank. This all helps it deliver a satisfyingly challenging workout at its highest resistance level. Be aware that it’s miles only (no km option) on the LCD console. 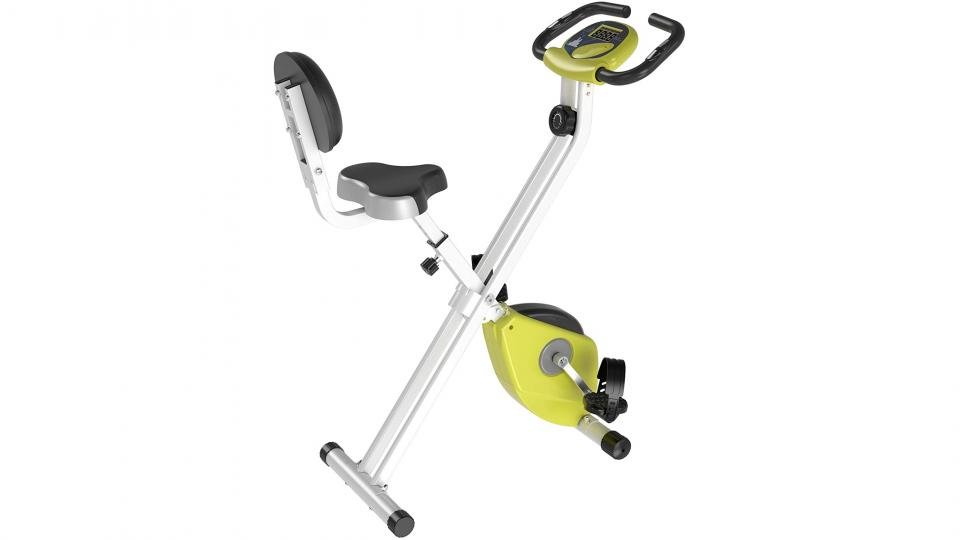 At this price you might not expect much more than a clothes horse with a seat, but Homcom’s folding exercise bike packs in all the features you’d expect, plus some you wouldn’t, including a backrest and handlebar sensors.

Right now, Amazon is offering the yellow and white model for a bargain £71.24, but this deal is only live for the next few days. Even the normal price of £95 for pink/white, and £100 for red/white and grey/white, is a great buy for an exercise bike with such excellent user reviews. 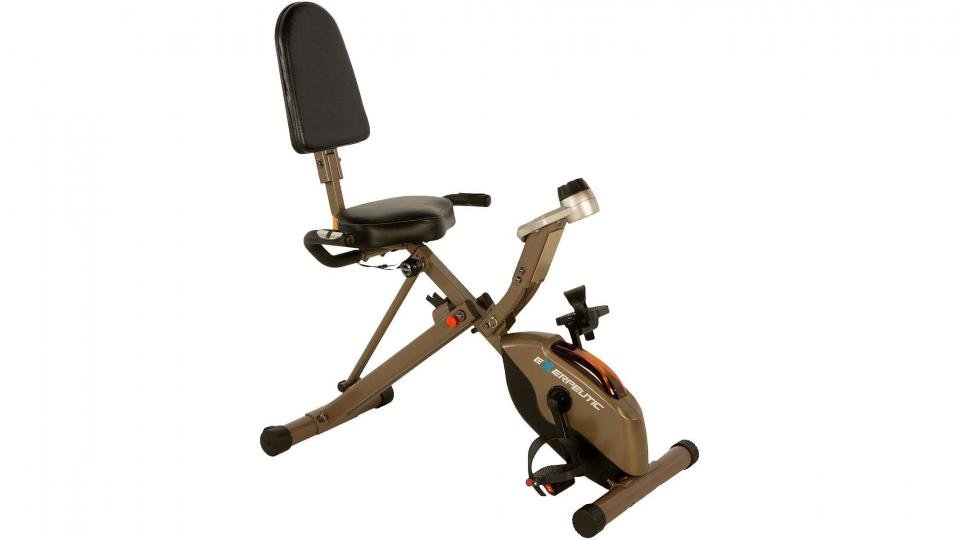 Forget your assumptions about recumbents being chunky devices that take up as much space as a rowing machine. The second Exerpeutic bike in our rundown is another solid, powerful model that you can hardly believe folds away to half its size, with an exceptionally good folding mechanism, and castors to help you trundle it into the corner or cupboard.

As with other Exerpeutic exercise bikes, this one uses magnetic resistance with a dual transmission flywheel, which helps to offer higher resistance than you might expect from a folding bike. And who doesn’t love a gold bike?