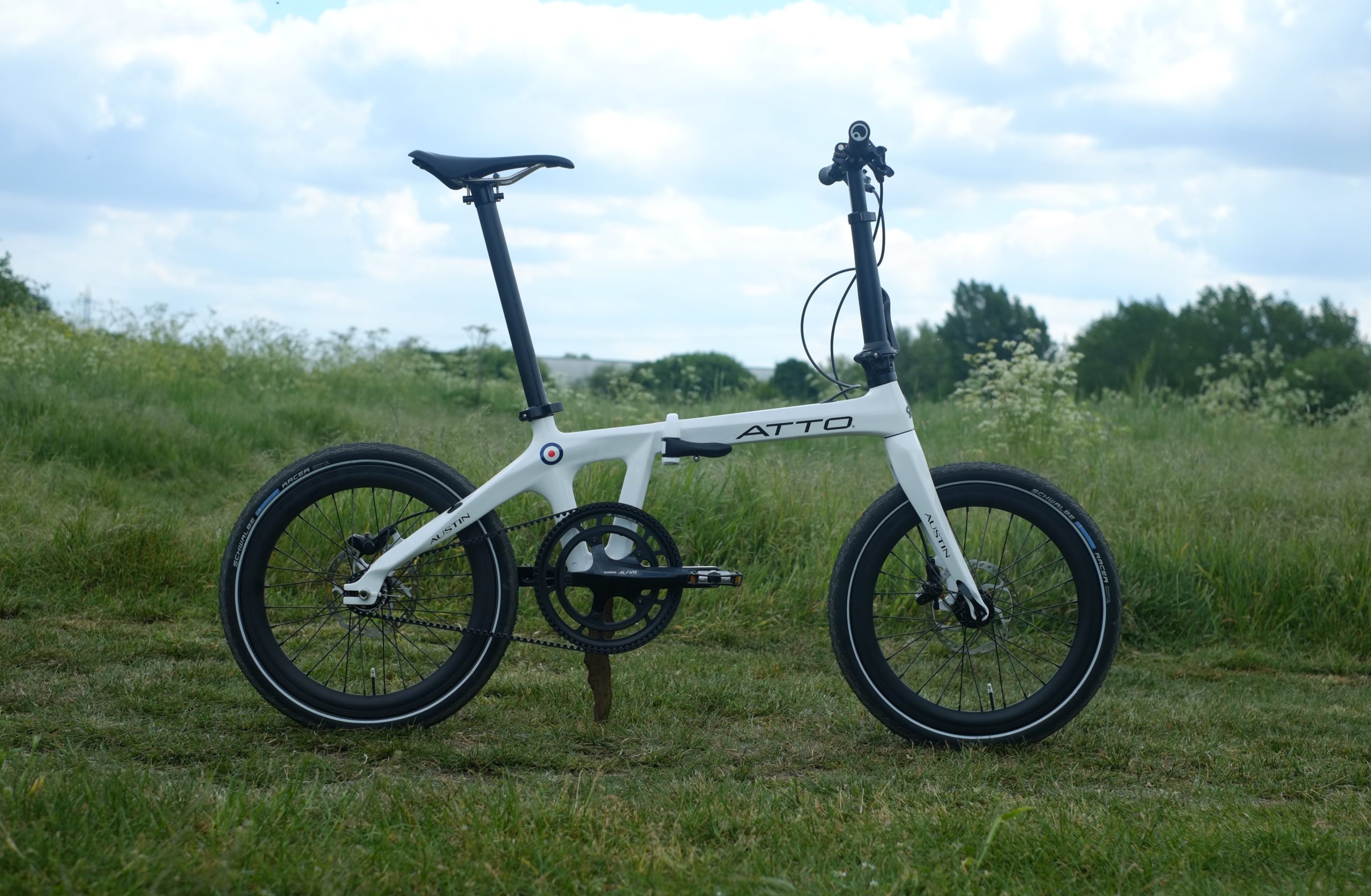 Branded as ‘a performance bike that just happens to fold’ the carbon fibre AC Atto takes the build of a high-end commuter and hangs it off a folding frame. Carbon rims, Shimano hydraulic disc brakes, and an oil-free Gates carbon belt drive are a world away from the parts found on some more agricultural folders.

As is the combined weight, which the brand claims as 7.5kg, but we clocked at a still very respectable 8.5kg.

While many brands, including Brompton, use a 16-inch wheel the AC Atto rolls on larger 20-inch rims. Made of carbon fibre, spinning on high-spec Novatec hubs, and surrounded by decent width Schwalbe tyres, these ensured that my first experience of the Atto was one of quick acceleration followed by smooth rolling progress.

In common with most folders, the bike’s short wheelbase means the steering can initially seem twitchy. Although within minutes I learnt to moderate the adjustment of the handlebars, and piloting the bike soon became second nature.

Also available with Shimano’s 11 speed Alfine hub gear for an additional £500, the standard single-speed model I borrowed saves a significant chunk of weight.

With little heft to the frame, and even less to the wheels, the AC Atto proved a rapid little beastie. Matching these, the rest of the finishing kit is above average too, with Shimano’s powerful disc brakes being the main stand out. Paired with the small wheels they’ve enough power to detach your retinas if pulled forcefully.

Obviously, there are limits to how far you can push it. With both the saddle and handlebars suspended some distance above the frame, it’s no surprise to find quite a bit of flex across the length of the bike. Not that many folding bikes encourage out-of-the-saddle sprinting, but it’s worth noting.

Despite being racy by design, the ride position of the AC Atto is also very adjustable. First, the height of the bars can be changed thanks to a quick release clamp on the steering mast. Secondly, the angle of the bars can also be adjusted via a further quick release fixing on top of the stem.

Allowing riders to get low for speed, or sit higher for a more relaxed ride, they help the AC Atto accommodate a wide variety of body shapes and riding styles.

Unfortunately, this adjustability comes at a price. With lots of clamps and joints between aluminium and carbon components, the AC Atto is somewhat prone to creaking. With carbon parts not keen on being squished too tightly, one solution might be to pick a handlebar height and angle, then swap the quick release brackets for more permanent fixings.

Also making itself known, the lever on the main hinge has a tendency to rattle, while I found the hinges themselves emitting the occasional squeak.

Perhaps then the AC Atto isn’t the best choice for those who demand complete silence of their bike. However, more universally annoying than either of these quirks was the degree of movement between the frame and seatpost. With the tolerance between the two on the lax side, this left the seatpost free to rock slightly within the seat tube, resulting in an occasional knocking sound.

The AC Atto’s folding mechanism will be familiar to Dahon or Tern users. It sees the handlebar and saddle dropped down before the frame folds in the middle to complete the process. With the collapsed package then held together by magnets at either end of the bike, it’s the work of 10-20 seconds.

Only slightly outperformed by the famous Brompton, the folded size is also a little larger at 38cm wide x 70cm tall x 76cm long. However, given the AC Atto’s larger wheels this is pretty respectable and leaves the folded bike easily small enough to be unobtrusive in most situations.

When carried folded, the AC Atto’s low weight also more than compensates for any extra bulk. This carryability is further improved by the Gates carbon drive system which won’t leave oily marks on your chinos. To save your shins both pedals can also be folded inwards, although this feature is redundant on the left-hand side as this pedal sits within the folded package. Swapping in a standard pedal here would be an easy way to save a few grams if that’s your thing.

Compared to heavier folders I’ve tried, the ride of the AC Atto is in a different league. Sure to appeal to roadies after a carry-along bike to replicate the experience of riding a racer or high-spec hybrid, it’s quick to accelerate, rolls well, and stops the second you pull the brakes.

Partly down to the build-kit and the bike’s carbon construction, its mid-size 20-inch wheels also play a part in creating this outsize performance.

With its disc brakes, Gates belt drive, and single-speed or hub-based gearing the AC Atto should also be low maintenance. However, the frame gives me slight pause for concern. Its adjustable parts and multiple hinges combine with a somewhat springy chassis to create the odd creak and squeak.

The tolerance between the seatpost and seat tube also left the clamp doing a lot of work to hold the two together. With folding bikes often having a surprisingly hard life on the daily commute, I’d be interested to see how these elements hold up in the long term.

From a quick spin, I can definitely vouch for the bike’s lively ride and decent fold. At a chunk over two grand, it’s not cheap, but the spec is solid and it’s one of a limited number of folders that could legitimately be described as fun to ride.

It’ll depend on your bank balance and temperament as to whether you think this all adds up to the asking price.